The Christie Lake Project is host to the Paul Bay, Ken Pen and Ōrora Uranium Deposits. The Company holds a 65.55% direct interest in The Project in a joint venture with JCU Canada. The current total resource estimate for the three deposits is 20.35 Million lb U3O8 at an average grade of 1.57%. The ultimate size of the Paul Bay, Ken Pen and Ōrora Deposits has not been fully defined and they remain open at depth and along strike.

The Christie Lake project is located 9 km northeast of and along strike of the McArthur River Uranium Mine, the world’s largest producer. The Project straddles the Eastern Athabasca High Grade Uranium Corridor and is the only junior-controlled uranium land package that is situated between the two giant uranium operations at McArthur River and Cigar Lake.

UEX’s current focus has been to test targets along the Yalowega Trend, a 4.2 km corridor with anomalous uranium and indicative hydrothermal alteration that hosts three known high-grade uranium deposits, the Paul Bay Deposit, the Key Pen Deposit, and the recently discovered Ōrora Zone. Several high-priority targets that include historic mineralized holes have yet to be tested along the Yalowega Trend that have great potential to yield additional uranium discoveries.

The prolific northeast trending P2 Fault structure, which hosts all the uranium at the nearby McArthur River deposits, the world’s largest and highest-grade uranium mine, extends onto the northwest corner of the Christie Lake property (Shown as Conductor “A” in the Christie Lake Property Map). This structure continues to the northeast and is offset to the east in two steps (B and C). Step C, the easternmost step is referred to as the Yalowega Trend.

Along the Yalowega Trend, the unconformity between the sandstone and basement rocks is approximately 420 m below surface. The primary structural zone is a left-lateral strike slip fault associated with zones of graphite within the basement metasedimentary rocks.

The Yalowega Trend hosts three known unconformity-related uranium deposits; Paul Bay, Ken Pen, and Ōrora. Paul Bay and Ken Pen were discovered by the previous operator in 1989 and 1993 respectively. Ōrora was discovered by UEX in 2017.

The Paul Bay Zone is a basement hosted uranium deposit occurring wholly within faulted basement rocks. The mineralized zone is 80 m wide and occurs as shoots extending up to 200 m down-dip into the basement along the intersection of small cross-faults with the main Yalowega Trend structure. The Yalowega Trend Fault at the unconformity up-plunge from the Paul Bay Deposit has yet to be tested and represents a great exploration target for a future drill program.

The Ōrora and Ken Pen Zones are unconformity uranium deposits which occur within faulted rocks straddling the unconformity. These zones extend lengthwise up to 160 m along the trend with shoots of mineralization and alteration extending into the basement along similar cross-fault intersections as seen at Paul Bay. The Ken Pen Deposit is known to extend up to 80 m into the basement, however the full extent of these zones into the basement has not been tested.

Several conductive packages trend northeast through the central and southern portion of the Christie Lake property and have never been examined and tested with drilling. 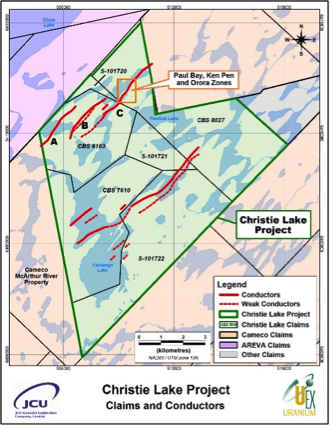 * Mineral resources are not mineral reserves and have not demonstrated economic viability. All figures have been rounded to reflect the relative accuracy of the estimates. Reported at a cut-off grade of 0.2% Uranium.

UEX's share of resources from Christie Lake is proportional to its 65.55% ownership interest in the project. Thus, UEX's share is: