UEX Corporation (UEX:TSX) (“UEX” or the “Company”) is pleased to announce the second tranche of assay results from the winter drilling program on the Company’s 100% owned West Bear Property, located in the eastern Athabasca Basin of northern Saskatchewan.  In January, UEX commenced a $4.25 million 110-160 drill hole program at West Bear with the objective of expanding the size of the West Bear Cobalt-Nickel Deposit (the “Deposit”) by extending cobalt mineralization along strike to the west.

To date, the Company has completed 110 holes of this winter’s exploration program and drilled 9,780 metres.  Assay results have been received for thirty-six drill holes.  UEX announced assay results from the first five holes in the Company’s news release dated February 7, 2019, available at www.sedar.com or UEX’s website at www.uex-corporation.

Thirty of the 31 holes from the second batch of assays returned composite grades that exceed the cobalt equivalent (“CoEq”) grade of 0.023% CoEq, the same cut-off grade used in UEX’s maiden resource estimate for the West Bear Cobalt-Nickel deposit announced on July 10, 2018 available at www.sedar.com or UEX’s website at www.uex-corporation.

With the available results from the current drilling program and a review of the historic sonic holes, the strike length of the West Bear Deposit has been increased from 400 m to 550 m (see Figure 1) with the majority of assays from the 2019 program yet to be received. UEX is encouraged by the results of the current drilling program and by the surprising results from the sonic drill program review.

The reader is cautioned that the results from the sonic drill program can be difficult to interpret.  Technical limitations on the depth of penetration of sonic drill rigs meant that in most cases drill holes were terminated prior to being able to fully penetrate into and/or through the fault structure that hosts the cobalt-nickel mineralization below the Uranium Deposit.  As a result, sonic holes were often terminated in cobalt-nickel mineralization.  In 2007, the Company was focussed exclusively on defining the Uranium Deposit and in many cases did not completely sample the rocks and fault structures that host the cobalt and nickel mineralization encountered below the Uranium Deposit.  As a result, UEX geologists will be reviewing the existing sonic drill holes and extending sampling coverage to ensure that all possible extensions to the West Bear Cobalt-Nickel Deposit are defined.

With the demand for electric vehicles increasing, we see the need for ethically-sourced cobalt from safe mining and geopolitical jurisdictions to power those cars.  Our winter drill results continue to grow our West Bear Cobalt-Nickel Deposit, one of the few known North American cobalt deposits.  The Company is eagerly awaiting the assay results of the final holes of the winter program.

Samples are selected using a portable X-Ray Fluorescence (“XRF”) Spectrometer to aid in the identification of mineralized intervals.  Selected drill core is then split in half sections on site and one half is collected for analysis with the other half core remaining on site for reference.  Where possible, samples are collected at a standardized 0.5 m interval through zones of mineralization but respect geological units and intervals.  Samples collected by UEX in 2005 and 2007 during the sonic drilling programs did not use an XRF Spectrometer to aid in identification of mineralization.

The West Bear Cobalt-Nickel Deposit currently has a strike length of over 550 m and a dip length of over 100 m. On July 10, 2018, the Company announced a maiden inferred resource estimate for the Deposit of 390,000 tonnes grading 0.37% cobalt and 0.22% nickel, which equates to 3,172,000 pounds of cobalt and 1,928,000 pounds of nickel. The West Bear Cobalt-Nickel Deposit mineral resources were determined using a cut-off grade of 0.023 percent cobalt equivalent (“CoEq”), using the equation CoEq = Co + (Ni x 0.2).  Only mineralization located within a conceptual open pit was included in the final resource estimate. 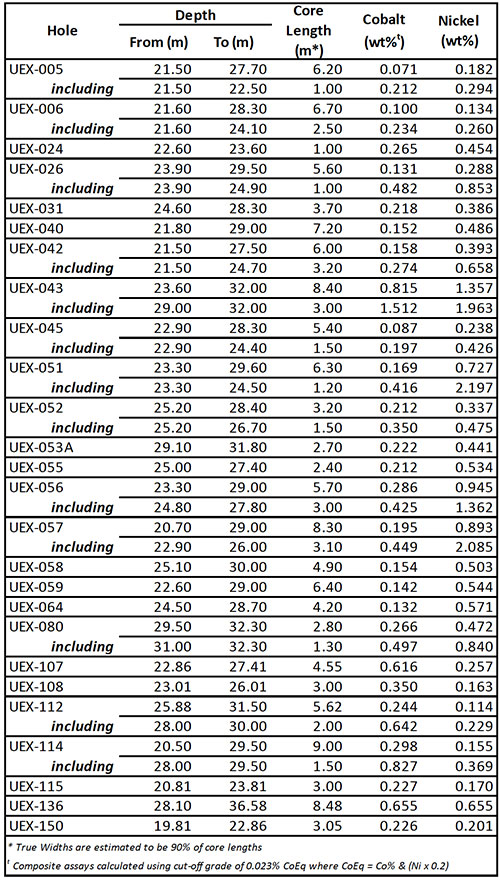 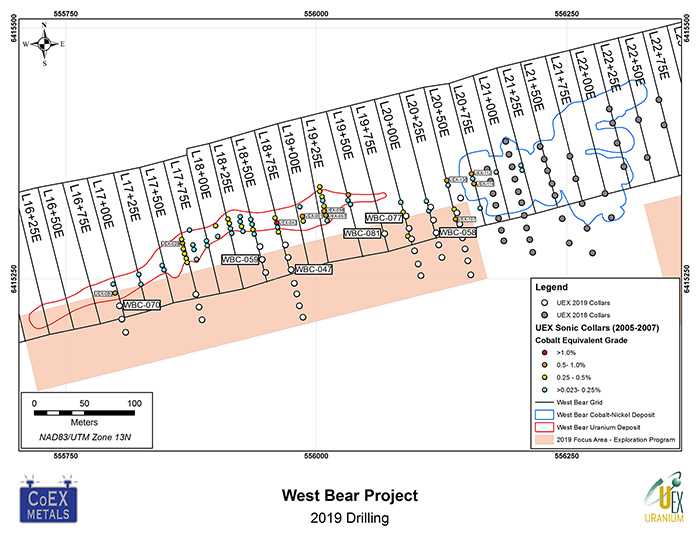