UEX Corporation (UEX:TSX) (“UEX” or the “Company”) is pleased to announce the fifth tranche of assay results have been received for twenty-three additional holes from the winter drilling program expanding the West Bear Cobalt-Nickel Deposit (the “Deposit”) on the 100% owned West Bear Property, located in the eastern Athabasca Basin of northern Saskatchewan.

Assay results from fourteen of the twenty-three holes received in the fifth tranche returned composite grades that exceed the cobalt equivalent (“CoEq”) grade of 0.023% CoEq, the same cut-off grade used in UEX’s maiden resource estimate for the West Bear Cobalt-Nickel Deposit announced on July 10, 2018 available at www.sedar.com or UEX’s website at www.uex-corporation.com (see Table 1 and Figure 1).

Results for the remaining twenty-four holes drilled this winter are still outstanding. The Company has also collected and submitted to the laboratory an additional 757 samples from 60 historical sonic drill holes and 12 historical diamond drill holes identified as containing previously unsampled intervals considered favourable for hosting cobalt-nickel mineralization. UEX is still awaiting the laboratory results from these historical holes.

It is exciting to see the West Bear Co-Ni Deposit beginning to take shape as the assay results are gradually received. The Deposit is beginning to reveal its secrets. Listening to these secrets, our Exploration team has identified even more drill targets passed over by previous operators for uranium potential but we now consider to be high-priority cobalt drill targets in the immediate area of West Bear and across our existing Athabasca Basin land holdings. 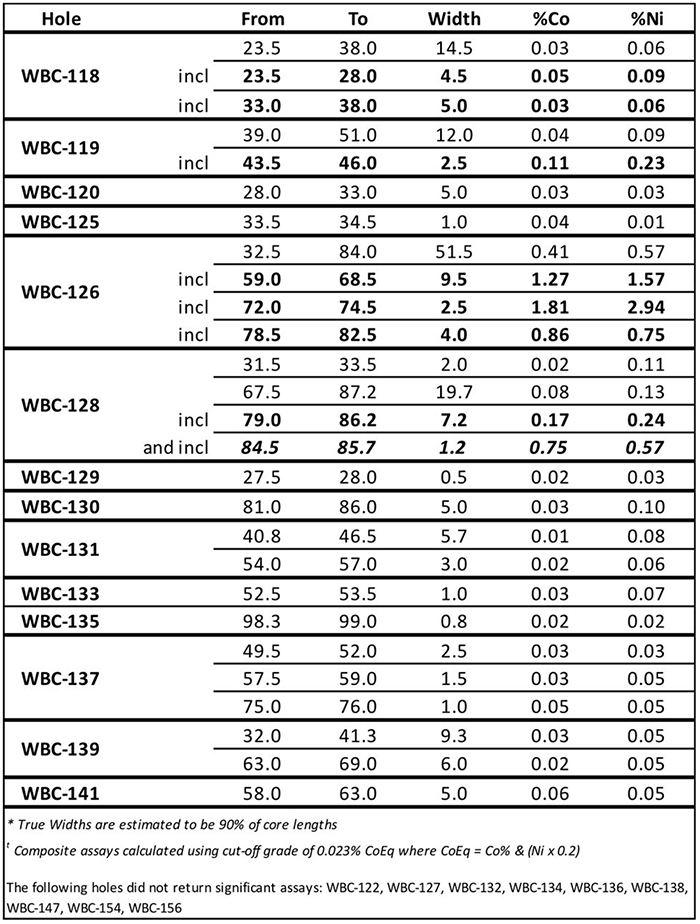 Samples are selected using a portable X-Ray Fluorescence (“XRF”) Spectrometer to aid in the identification of mineralized intervals. Selected drill core is then split in half sections on site and one half is collected for analysis with the other half core remaining on site for reference. Where possible, samples are collected at a standardized 0.5 m interval through zones of mineralization but respect geological units and intervals.

The West Bear Property is an advanced exploration project located in the eastern Athabasca Basin of northern Saskatchewan, Canada that contains both the West Bear Cobalt-Nickel Deposit and the West Bear Uranium Deposit. The Property is approximately 740 kilometres north of Saskatoon, west of Wollaston Lake and measures approximately 7,983 hectares comprising of 24 contiguous areas to which UEX has 100% ownership, with the exception of Mineral Lease 5424 in which UEX owns a 77.575% interest. The Deposit is located within an area of the Athabasca Basin that has excellent infrastructure and is situated within 10 km of an existing all-weather road and power lines that service Cameco Corporation’s nearby Cigar Lake Mine and Rabbit Lake Operation, as well as Orano’s McClean Lake Operation.

The West Bear Cobalt-Nickel Deposit currently has a strike length of over 600 m and a dip length of over 100 m. On July 10, 2018, the Company announced a maiden inferred resource estimate for the Deposit of 390,000 tonnes grading 0.37% cobalt and 0.22% nickel, which equates to 3,172,000 pounds of cobalt and 1,928,000 pounds of nickel. The West Bear Cobalt-Nickel Deposit mineral resources were determined using a cut-off grade of 0.023 percent cobalt equivalent (“CoEq”), using the equation CoEq = Co + (Ni x 0.2). Only mineralization located within a conceptual open pit was included in the final resource estimate.

The company is also involved in one cobalt-nickel exploration project located in the Athabasca Basin of northern Saskatchewan. The West Bear Project was formerly part of UEX’s Hidden Bay Project and contains the West Bear Cobalt-Nickel Deposit and the West Bear Uranium Deposit.

The nineteen projects are located in the eastern, western and northern perimeters of the Athabasca Basin, the world's richest uranium belt, which in 2017 accounted for approximately 22% of the global primary uranium production. UEX is currently advancing several uranium deposits in the Athabasca Basin which include the Christie Lake deposits, the Kianna, Anne, Colette and 58B deposits at its currently 49.1%-owned Shea Creek Project (located 50 km north of Fission’s Triple R Deposit and Patterson Lake South Project, and NexGen’s Arrow Deposit) the Horseshoe and Raven deposits located on its 100%-owned Horseshoe-Raven Development Project and the West Bear Uranium Deposit located at its 100%-owned West Bear Project.