Saskatoon, Saskatchewan, July 14, 2022 – UEX Corporation (TSX:UEX) (“UEX” or the “Company”) is pleased to announce the commencement of the 2022 summer exploration drilling program at its Christie Lake Project located in the Athabasca Basin of northern Saskatchewan (see Figure 1).

Summer exploration drilling is planned in three target areas at Christie Lake using two drill rigs. The summer program will consist of approximately 12 holes for an anticipated total of about 8,000 m of drilling (see Figure 2) following up on the encouraging results of the winter drilling program.  Priority drilling will focus on testing for basement-hosted uranium near the Paul Bay, Ken Pen and Ōrora Deposits, down-dip of existing mineralized holes that are located in the gap areas between the three deposits along the Yalowega Trend. The program will be further guided by the UEX Exploration Team’s updated structural interpretation of the geology in deposits area.  The presence of structurally controlled basement mineralization below known unconformity-hosted mineralization is commonly observed in the Athabasca Basin, such as at the Kianna, 58B, and Anne Deposits at UEX’s Shea Creek Project, the Millennium Deposit and at the mined out Gaertner and Deilmann Deposits at Cameco’s Key Lake Mine.

The program will test down-dip of known shallow basement-hosted mineralization encountered in previous drilling programs that remain open for expansion.  Targets selected for summer drilling include:

The Exploration Team has put significant effort into advancing our knowledge of the controls of the Christie Lake deposits and is excited to apply this knowledge to both our basement-focused program along the Yalowega Trend near Paul Bay, and for the grid-scale evaluation of the B and A-Trends. The Winter program yielded several great exploration vectors near the Yalowega Trend Deposits and in the B-Trend Area, and the Exploration Team is looking forward to the results of this exploration program.

The expanded summer drilling program has also commenced at the Waterfound River Project, a partner-operated JCU joint-venture project.  Approximately 4,000 m of drilling in 8 drill holes is planned along the trend of the Alligator Zone where unconformity-hosted uranium mineralization was encountered in multiple holes during the winter program (see UEX New Release dated March 29, 2022) where the best drillhole WF-68 encountered uranium mineralization averaging 5.91% eU3O8 over 3.9 metres from 473.6 m to 477.5 m. JCU has a 25.101% interest in the Waterfound River Project.

UEX holds a 82.775% combined direct and indirect interest in the Christie Lake Project which is a joint venture with its 50% owned JCU (Canada) Exploration Company, Limited. The Project is located approximately 9 km northeast and along strike of Cameco’s McArthur River Mine.  The P2 Fault, the controlling structure for all of the McArthur River deposits, continues to the northeast beyond the mine and onto the Christie Lake Project. UEX believes that, through a series of en-echelon steps, the northeast strike extension of the P2 Fault not only crosses the Project but also controls the three known uranium deposits on Christie Lake: the Ōrora, Paul Bay and Ken Pen Deposits.

The Christie Lake Project is currently estimated to contain 588,000 tonnes grading 1.57% U3O8, which equates to 20.35 million pounds of U3O8 using a cut-off grade of 0.2% U3O8 and as documented in the “Technical Report for the Christie Lake Uranium Project, Saskatchewan, Canada” which was filed on July 8, 2022 and has an effective date of December 31, 2021. The Technical Report is available on the Company’s website at www.uexcorp.com and on SEDAR at www.sedar.com.

The technical information in this news release has been reviewed and approved by Roger Lemaitre, P.Eng., P.Geo., UEX’s President and CEO and Chris Hamel, P.Geo, UEX’s Vice President, Exploration, who are each considered to be a Qualified Person as defined by National Instrument 43-101.

UEX’s directly-owned portfolio of projects is located in the eastern, western and northern perimeters of the Athabasca Basin, the world's richest uranium region which in 2020 accounted for approximately 8.1% of the global primary uranium production. In addition to advancing its uranium development projects through its ownership interest in JCU, UEX is currently advancing several other uranium deposits in the Athabasca Basin which include the Paul Bay, Ken Pen and Ōrora deposits at the Christie Lake Project , the Kianna, Anne, Colette and 58B deposits at its currently 49.1%-owned Shea Creek Project, the Horseshoe and Raven deposits located on its 100%-owned Horseshoe-Raven Project and the West Bear Uranium Deposit located at its 100%-owned West Bear Project.

UEX is also 50:50 co-owner of JCU (Canada) Exploration Company, Limited. JCU’s portfolio of projects includes interests in some of Canada’s key future uranium development projects, notably a 30.099% interest in Cameco’s Millennium Project, a 10% interest in Denison’s Wheeler River Project, and a 33.8123% interest in Orano Canada’s Kiggavik Project, located in the Thelon Basin in Nunavut, as well as minority interests in nine other grassroots uranium projects in the Athabasca Basin. 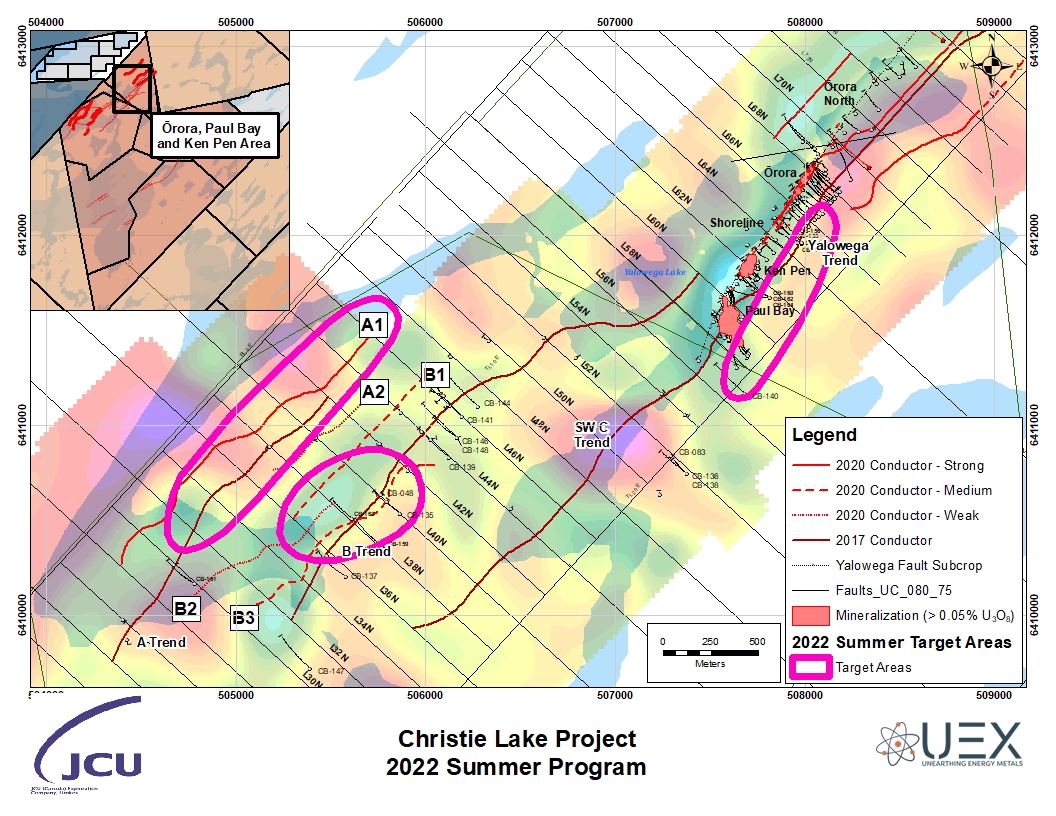