Saskatoon, Saskatchewan, April 11, 2022 – UEX Corporation (TSX:UEX) (“UEX” or the “Company”) is pleased to announce the completion of its 2022 winter exploration programs for the Christie Lake and Hidden Bay Projects located in the Athabasca Basin of northern Saskatchewan (see Figure 1).

Seven holes tested the area between the Ōrora and Paul Bay Deposits. The best result from the winter program was drill hole CB-164 that tested for basement mineralization between the Paul Bay and Ken Pen Deposits and intersected uranium mineralization in faulted rocks just below the unconformity that averaged 0.11% eU3O8 over 1.0 m from 471.9 to 472.9 m.  Strong hydrothermal alteration and fault structures were associated with the uranium mineralization, suggesting that a viable pathway is present to move uraniferous hydrothermal fluids into the basement environment below the known deposits in this area.  UEX considers CB-164 to be an encouraging result that will require follow-up by testing during the summer drill programs.

Two other holes, CB-160 and CB-162 drilled to test the basement rocks between the Paul Bay and Ken Pen Deposits, also encountered a permissive fault structure with associated hydrothermal alteration that extends below the existing uranium deposits.  Further drill tests are planned for the area this summer.

Two drill holes tested the DC Resistivity low adjacent to the B Conductor Trend.  Drill hole CB-163 encountered elevated radioactivity in the sandstone column approximately 180 m above the unconformity coincident with fracture controlled sooty grey alteration and secondary hematite alteration. This radioactive interval averaged 0.03% eU3O8 over 0.3 m from 298.6 to 298.9 m.  It is uncommon to encounter elevated radioactivity so high up in the sandstone. This type of occurrence in the Athabasca Basin is often associated with more intense mineralization at the unconformity or below into the basement. These early test results from the DC Resistivity Low represent an exploration vector towards both the east and west towards the adjacent A & B Conductor trends.  Follow-up in drilling near CB-163 along the A and B trends represent high priority drill targets for the Christie Lake summer drill program.

All drill core samples from the winter program at Christie Lake have been shipped to the SRC Geoanalytical Laboratory for geochemical analysis.

The winter drill program testing the area below the known deposits at Christie Lake has shown that UEX’s hypothesis of the potential to find more uranium in the basement structures has merit.  Uranium-bearing hydrothermal fluids are penetrating into the basement rocks. This winter’s results have helped focus our plan for the upcoming summer program and provided further encouragement that drilling of these refined targets may yield additional uranium mineralization.

The highly anomalous radioactivity encountered in the sandstone column in the B Conductor area overlying the B-Trend DC Resistivity Low was a fantastic surprise and upgrades the prospectivity of this area.  The UEX Team is eagerly anticipating following-up this radioactivity with the upcoming summer drill program.

Winter Drilling at the 100% owned Hidden Bay Project consisted of 3,072 m drilling in 19 drill holes (see Figures 3 & 4) to test two parallel conductive trends along 1,800 m of strike length within the Uranium-Nickel Sands (“U-Ni Sands”) target area that is adjacent to Cameco’s Rabbit Lake Mine. The 2022 winter drilling program followed up the reconnaissance drilling performed in 2021 and was able to extend the structure and alteration from the 2021 program and identified similar structure and alteration features to the Horseshoe and Raven Deposits that are located approximately 2.5 km south of the U-Ni Sands anomaly. Drilling in 2022 extended the U-Ni Sands alteration system in the area to 1,800 m length, UEX is waiting on the geochemistry results from the program to perform a full assessment of the future of this target area. Drilling in the Dwyer Lake area was postponed due to issues with drill contractor availability.

When U3O8 is preceded by an ‘e’ such as %eU3O8, this indicates that the uranium concentration reported is a Radiometric Equivalent Grade (“REG”) determined within the drill hole in-situ using a calibrated radiometric gamma probe.  The estimation of uranium grades using down-hole probe radioactivity is an industry standard practice and is used by Athabasca Basin uranium producers and explorers to calculate REGs in both mine and exploration settings.  The details on how eU3O8 was calculated from the probe grades is outlined in our press release of May 24, 2016.

Samples from all holes have been collected for assay analysis to confirm these equivalent grades.  The samples will be analyzed at the Geoanalytical Laboratory at the Saskatchewan Research Council in Saskatoon, Saskatchewan, with results expected in the coming weeks.

The Christie Lake Project in the eastern Athabasca Basin, a joint venture with JCU, where UEX owns a combined 82.775% interest (UEX direct – 65.5492%; JCU indirect – 34.4508%). UEX is currently the operator for Christie Lake.  The Project is located approximately 9 km northeast and along strike of Cameco’s McArthur River Mine.  The P2 Fault, the controlling structure for all of the McArthur River deposits, continues to the northeast beyond the mine and onto the Christie Lake Project. UEX believes that through a series of en-echelon steps the northeast strike extension of the P2 Fault not only crosses the Project but also controls the three known uranium deposits on Christie Lake: the Ōrora, Paul Bay and Ken Pen Deposits.

The Christie Lake Project is currently estimated to contain 588,000 tonnes grading 1.57% U3O8, which equates to 20.35 million pounds of U3O8 using a cut-off grade of 0.2% U3O8 and as documented in the “Technical Report for the Christie Lake Uranium Project, Saskatchewan, Canada” which was filed on February 1, 2019 and has an effective date of December 13, 2018. The Technical Report is available on the Company’s website at www.uexcorp.com and on SEDAR at www.sedar.com.

About the Hidden Bay Project

The Hidden Bay Project is 100%-owned by UEX. The property is located in the prolific Eastern Athabasca Uranium Mining Camp and is adjacent to the Mines and Mills at the Rabbit Lake and McClean Lake operations operated by Cameco Corporation and Orano Canada respectively. The property represents a unique opportunity for brownfields exploration on a number of trends where uranium production has already occurred on the adjacent mine properties. The Hidden Bay drill hole database and decades of geophysical and geochemical data collection provide UEX with a rich data set to guide exploration activities that are focused on exploring for basement-hosted uranium mineralization within the 51,847 ha footprint of the property. The Property is also adjacent to the Horseshoe-Raven Project that is host to the Horseshoe and Raven Uranium Deposits that together contain 37,426,400 Lb U3O8 at a 0.05% cut-off grade (See “Technical Report on the Horseshoe-Raven Project, Saskatchewan” filed on November 16, 2021, with an effective date of November 16, 2021). The Technical Report is available on the Company’s website at www.uexcorp.com or on SEDAR at www.sedar.com.

The technical information in this news release has been reviewed and approved by Roger Lemaitre, P.Eng., P.Geo., UEX’s President and CEO and Chris Hamel, P.Geo, UEX’s Vice President, Exploration, who are each considered to be a Qualified Person as defined by National Instrument 43-101.

UEX’s directly-owned portfolio of projects is located in the eastern, western and northern perimeters of the Athabasca Basin, the world's richest uranium region which in 2020 accounted for approximately 8.1% of the global primary uranium production. In addition to advancing its uranium development projects through its ownership interest in JCU, UEX is currently advancing several other uranium deposits in the Athabasca Basin which include the Paul Bay, Ken Pen and Ōrora deposits at the Christie Lake Project , the Kianna, Anne, Colette and 58B deposits at its currently 49.1%-owned Shea Creek Project, the Horseshoe and Raven deposits located on its 100%-owned Horseshoe-Raven Project and the West Bear Uranium Deposit located at its 100%-owned West Bear Project.

UEX is also 50:50 co-owner of JCU (Canada) Exploration Company, Limited with Denison Mines Corp. JCU’s portfolio of projects includes interests in some of Canada’s key future uranium development projects, notably a 30.099% interest in Cameco’s Millennium Project, a 10% interest in Denison’s Wheeler River Project, and a 33.8123% interest in Orano Canada’s Kiggavik Project, located in the Thelon Basin in Nunavut, as well as minority interests in nine other grassroots uranium projects in the Athabasca Basin. 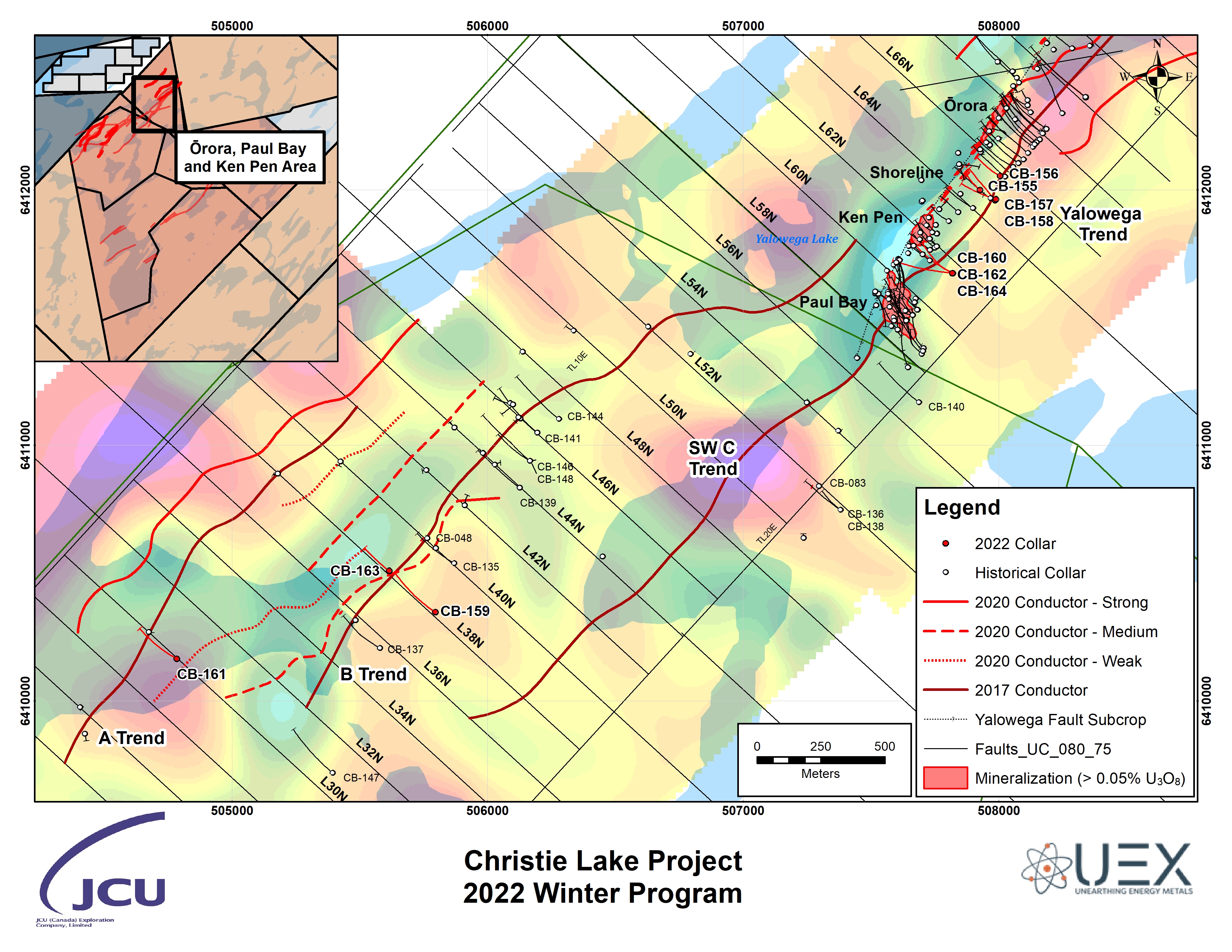 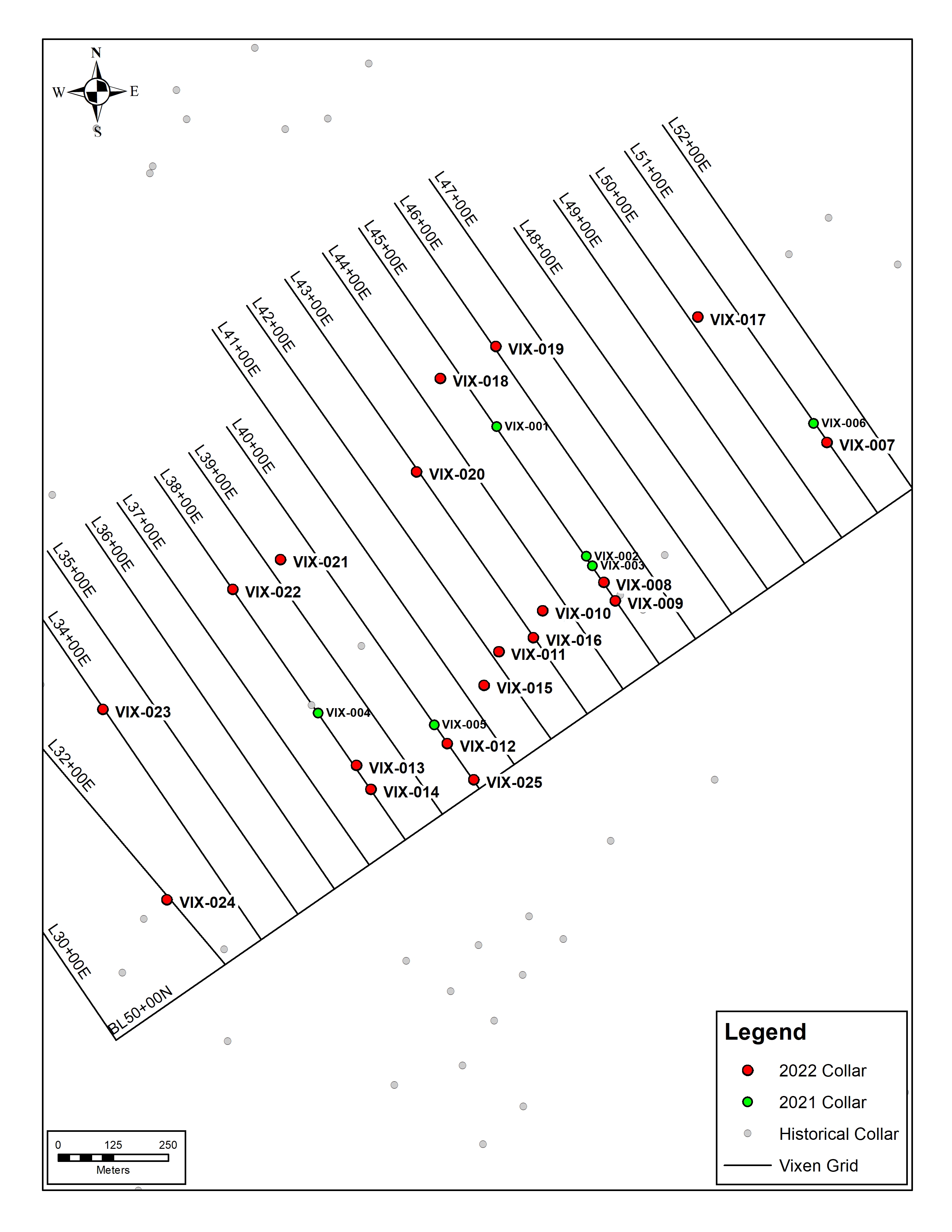