UEX Corporation (UEX:TSX) (“UEX” or the “Company”) is pleased to announce assay and radiometric results from the winter 2017 drilling program at the Christie Lake Project, where we successfully  expanded the Ōrora Zone and identified the potential for extending uranium mineralization down-dip into the basement.

CB-116A-2 increases the width of the new discovery along its southwestern margin to a minimum of 20 m, the widest section Ōrora Zone mineralization encountered at the unconformity to date. Ōrora remains open for expansion along strike to the southwest and to the northeast and down-dip to the southeast into the basement.

Our team has begun to understand the orientation of the Ōrora deposit.  Holes CB-109 and CB-116A have identified an ultra-high grade structural trap ranging from 8 to 16m wide, skirted by a halo of uranium mineralization.  We are eagerly anticipating the summer drill program when we will be growing Ōrora by targeting this key structural feature along the Yalowega Trend.

UEX is reporting the assay and REG results of six holes drilled to expand the newly discovered Ōrora Zone.  Results of these holes are presented in the tables below:

Assays from hole CB-116A confirm the very high grade nature of the mineralization from which REGs were previously reported (see UEX News Release of April 4, 2017). Despite the significant core loss, the assays correlate well with the REGs.

For a map of the Ōrora Zone intersections, please see Figure 1.

The results of holes CB-116A-2, CB-114C and historic holes CB-050 and CB-075 suggest that the Ōrora Zone mineralization may exhibit both classic unconformity and basement style mineralization, similar to UEX’s Shea Creek Deposits and Cameco’s Key Lake Mine.

Assays results from several Ōrora Zone holes have yet to be received by the Company.

This winter, UEX completed 18 holes totaling 8,171 m of the planned 20 hole – 12,000 m drill program.  Significant meterage was saved from the plan after the discovery of the Ōrora Zone, which required the use of in-hole wedging to accurately hit its targets. Amounts not expended during the winter program will be combined with the summer Christie Lake drilling program.

UEX (TSX:UEX, OTC:UEXCF.PK, UXO.F) is a Canadian uranium exploration and development company involved in fourteen uranium projects, including three that are 100% owned and operated by UEX, one joint venture with AREVA Resources Canada Inc. (“AREVA”) that is operated by UEX, as well as eight joint ventures with AREVA, one joint venture with AREVA and JCU (Canada) Exploration Company Limited, which are operated by AREVA, and one project (Christie Lake) under option from JCU (Canada) Exploration Company Limited and operated by UEX.  The fourteen projects are located in the eastern, western and northern perimeters of the Athabasca Basin, the world's richest uranium belt, which in 2015 accounted for approximately 22% of the global primary uranium production.  UEX is currently advancing several uranium deposits in the Athabasca Basin which include the Christie Lake deposits, the Kianna, Anne, Colette and 58B deposits at its currently 49.1%-owned Shea Creek Project (located 50 km north of Fission’s Triple R Deposit and Patterson Lake South Project, and NexGen’s Arrow Deposit) the the Horseshoe and Raven deposits located on its 100%-owned Horseshoe-Raven Development Project and the West Bear Deposit located at its 100%-owned Hidden Bay Project. 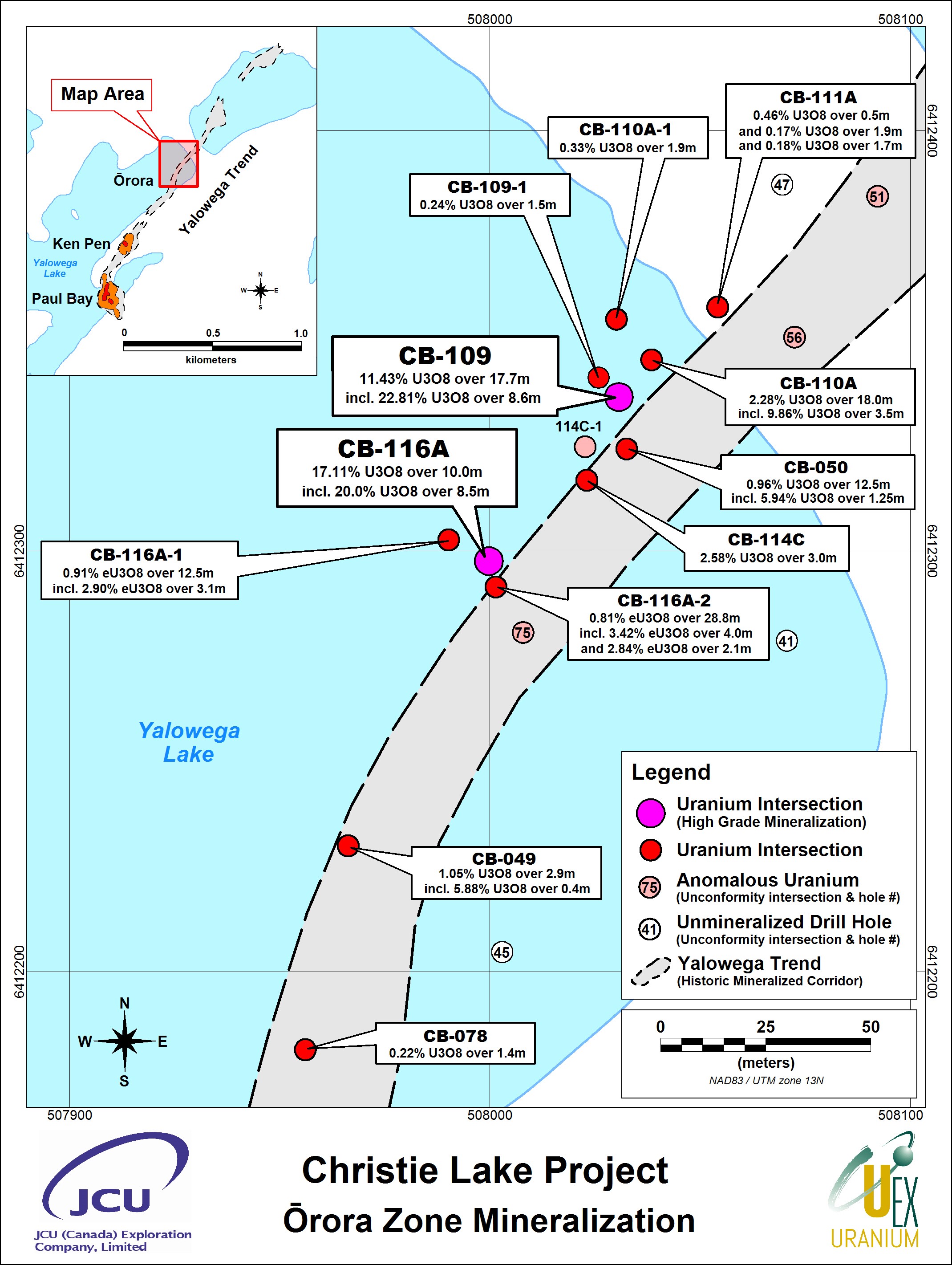