UEX Corporation (UEX:TSX) (“UEX” or the “Company”), through its 100%-owned subsidiary, CoEX Metals Corporation (“CoEX”) is pleased to announce the third tranche of assay results have been received for fourteen additional holes from the Phase 1 winter drilling program on the 100%-owned West Bear Cobalt-Nickel Prospect, located in the eastern Athabasca Basin of northern Saskatchewan.

The Company completed 41 holes totaling 4,457 m on its West Bear Cobalt-Nickel Prospect located on the West Bear Project (the “Project”) with the objective of expanding the size of the cobalt and nickel mineralized zone.  Phase 1 drilling activities at West Bear have now been concluded in preparation for the spring thaw.

Drilling at West Bear continues to yield impressive drill results.  The first twenty-six holes have successfully expanded the deposit both in the down-dip direction and up-dip to the unconformity.  We eagerly await the assay results of the final fifteen holes of the winter program.

The table below summarized the assay results from the third tranche of samples. 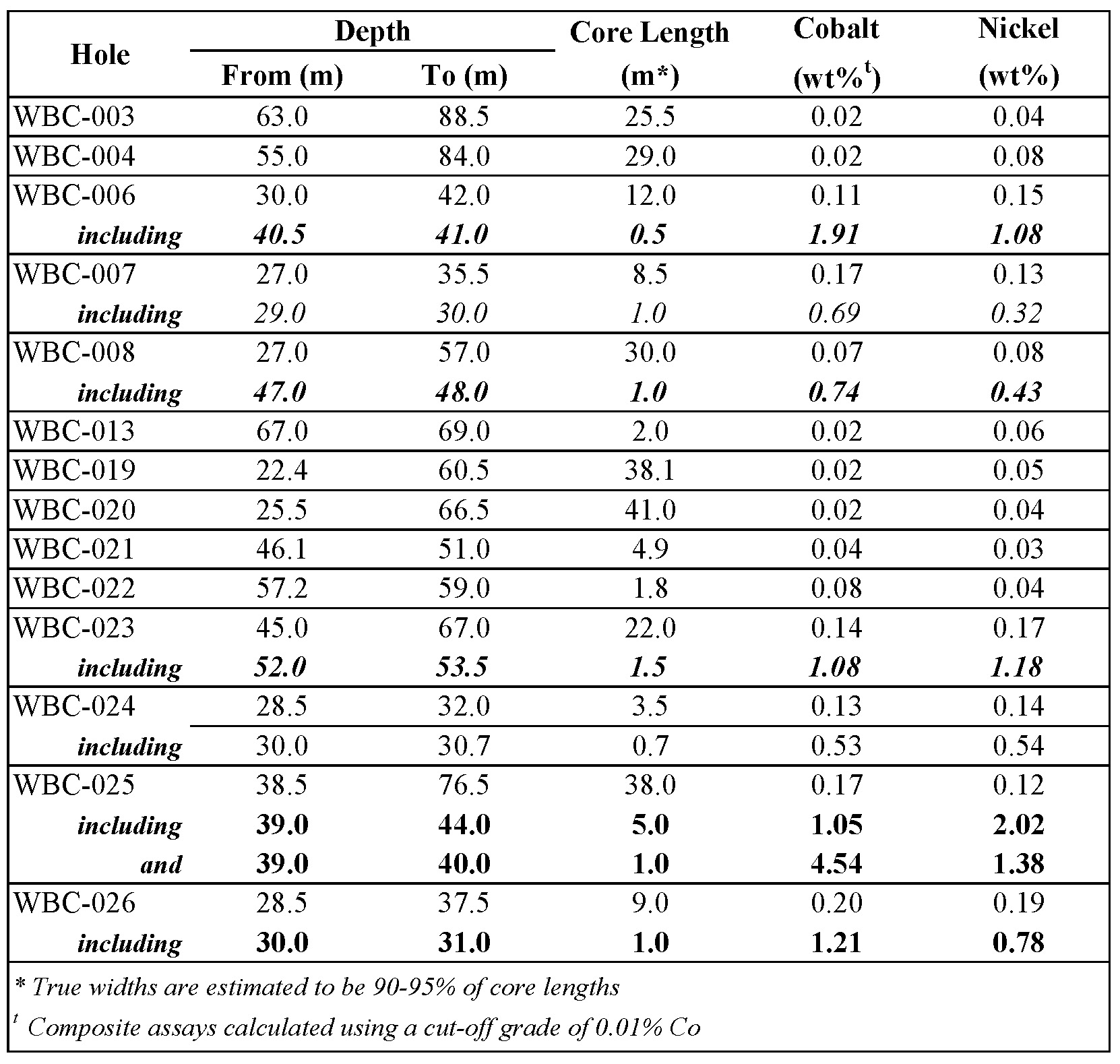 CoEX has yet to receive complete assay results for 15 holes that were drilled during the winter campaign.

The samples are shipped to the Geoanalytical Laboratory at the Saskatchewan Research Council (“SRC”) in Saskatoon, Saskatchewan.  Analysis at the SRC laboratory for Cobalt, Nickel, Lead, Zinc, and Arsenic (wt %) was completed using the ICP-OES method with an Aqua Regia digestion.  The SRC Geoanalytical Laboratory is an ISO/IEC 17025:2005 accredited facility (#537) by the Standards Council of Canada.

Assay intervals were composited using a cut-off grade of 0.01% Cobalt.  All depth measurements and sample intervals reported are down-hole measurements from drill core.  True thickness of the ore zones has yet to be determined and is estimated at 90-95% of core thickness.

The company is also involved in one cobalt-nickel exploration project located in the Athabasca Basin of northern Saskatchewan.  The West Bear Project was formerly part of UEX’s Hidden Bay Project and contains the West Bear Cobalt-Nickel Prospect and the West Bear Uranium Deposit.  The seventeen projects are located in the eastern, western and northern perimeters of the Athabasca Basin, the world's richest uranium belt, which in 2016 accounted for approximately 23% of the global primary uranium production.  UEX is currently advancing several uranium deposits in the Athabasca Basin which include the Christie Lake deposits, the Kianna, Anne, Colette and 58B deposits at its currently 49.1%-owned Shea Creek Project (located 50 km north of Fission’s Triple R Deposit and Patterson Lake South Project, and NexGen’s Arrow Deposit) the Horseshoe and Raven deposits located on its 100%-owned Horseshoe-Raven Development Project and the West Bear Uranium Deposit located at its 100%-owned West Bear Project.