UEX Corporation (UEX:TSX) (“UEX” or the “Company”) is pleased to announce that the last outstanding assays from the winter drilling program have been received from holes testing  the Ōrora Zone at the Christie Lake Project.

A two-phase exploration drilling program with a combined budget of up to $2.5 million has been approved by the project partners with the sole focus of expanding the Ōrora Zone.  Preparations for the summer campaign, including exploration permitting, are currently underway.  UEX anticipates commencing the summer drill program in late June.

These composite assay intervals confirm the REG grades previously reported in UEX’s News Release of April 26, 2017.  True widths are anticipated to be approximately 80-85% of the mineralized core length.

The Ōrora Zone discovery has so far been defined over a minimum strike length of 65 m and has a width of at least  20 m at its southwestern end.  The ultimate width of the Ōrora Zone at the unconformity has not yet been defined by drilling.  Most importantly, Ōrora remains open for expansion along strike to the southwest and to the northeast and down-dip to the southeast into the basement.

For a location of the Ōrora Zone mineralized intersections, please refer to Figure 1.

UEX and JCU have approved a summer program with the sole objective of expanding the size of the Ōrora Zone.  Initially, the program will be focused on expanding the Ōrora Zone in 25 m increments along strike in the direction of historic uranium mineralized hole CB-049, located approximately 75 m to the southwest of hole CB-116A (see Figure 1).   UEX is also planning to target extension of the Ōrora Zone to the northeast along strike, and down-dip into the basement.

The summer campaign is a two-phase program with a combined budget of up to $2.5 million utilizing two drills and will consist of up to 20 drill holes totaling 9,000 m.  UEX will be using directional drilling to assist with targeting precision, reducing the overall meterage needed to test for extensions of the Ōrora Zone.

UEX announces that Mr. Ed Boney is no longer the Chief Financial Officer (CFO") of the Company.  Roger Lemaitre, the Company's CEO, will act as Interim CFO while the Company conducts an executive search to identify a permanent CFO.  Continuity in financial reporting in the interim will be handled by the Company's Manager of Financial Reporting, Valerie Chen, CPA, CA.

UEX (TSX:UEX, OTC:UEXCF.PK, UXO.F) is a Canadian uranium exploration and development company involved in fourteen uranium projects, including three that are 100% owned and operated by UEX, one joint venture with AREVA Resources Canada Inc. (“AREVA”) that is operated by UEX, as well as eight joint ventures with AREVA, one joint venture with AREVA and JCU (Canada) Exploration Company Limited, which are operated by AREVA, and one project (Christie Lake) under option from JCU (Canada) Exploration Company Limited and operated by UEX.  The fourteen projects are located in the eastern, western and northern perimeters of the Athabasca Basin, the world's richest uranium belt, which in 2015 accounted for approximately 22% of the global primary uranium production.  UEX is currently advancing several uranium deposits in the Athabasca Basin which include the Christie Lake deposits, the Kianna, Anne, Colette and 58B deposits at its currently 49.1%-owned Shea Creek Project (located 50 km north of Fission’s Triple R Deposit and Patterson Lake South Project, and NexGen’s Arrow Deposit) the Horseshoe and Raven deposits located on its 100%-owned Horseshoe-Raven Development Project and the West Bear Deposit located at its 100%-owned Hidden Bay Project. 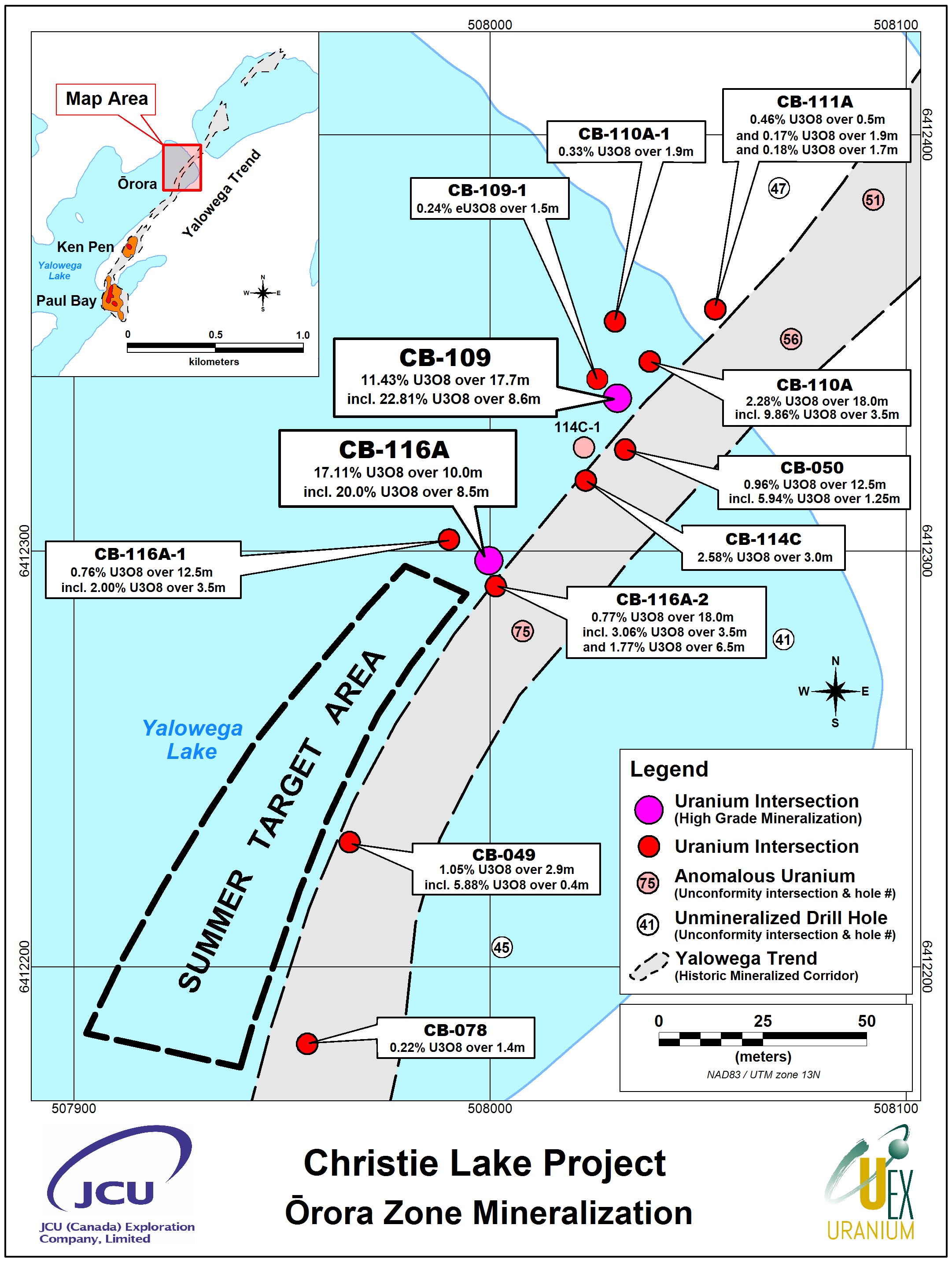