UEX Corporation (UEX:TSX) (“UEX” or the “Company”) is pleased to announce the results of the summer drilling program in the Shoreline area at the Christie Lake Project.

Assay results collected during the summer program are shown in the table below.  Uranium assay analysis was conducted at the Saskatchewan Research Council’s Geoanalytical Laboratory in Saskatoon, Saskatchewan.  The SRC Geoanalytical Laboratory is an ISO/IEC 17025:2005 accredited facility (#537) by the Standards Council of Canada.  Assay intervals were composited using a cut-off grade of 0.1% U3O8.  All depth measurements and sample intervals reported are down-hole measurements from drill core.  True thickness has yet to be determined and is estimated at 80-85% of core thickness. The locations of the summer drill intersections in relation to the Ken Pen and Ōrora Deposits can be found in Figure 1.

Now that the summer program has been completed, UEX will be focusing its efforts for the rest of the year on completing three-dimensional models of the Paul Bay, Ken Pen, and Ōrora Deposits in preparation for our maiden NI-43-101 resource.

With the completion of the summer program, UEX has now met our work obligations under the Christie Lake Option Agreement to earn our 60% interest in Project, which we expect will be finalized shortly. We are encouraged that the unconformity expression of the Yalowega Trend continues to yield uranium mineralization and follow-up drilling will be required between Ken Pen and Ōrora.  While the Trend remains unexplored along strike to the southwest of the Paul Bay Deposit, UEX has yet to test the basement-hosted uranium potential northeast of Ken Pen, one of the key recognized exploration targets identified by UEX during the acquisition of the Christie Lake Project, nor have we had the opportunity to test for Ōrora-like targets up-dip of known mineralization on the B Trend immediately west of the existing deposits.

UEX believes it is appropriate to inform investors that the Global X Uranium Exchange Traded Fund (“Global X”) has completed a rebalancing of its fund in respect to its holdings in UEX.  Because of changes to the underlying index used by Global X to include larger companies in various nuclear fuel cycle industries, Global X has been systematically rebalancing holdings in all uranium mining and development companies, including UEX.  As a result, Global X’s position in UEX has decreased from approximately 38,299,040 shares in UEX ( approximately 11.0% of total UEX shares outstanding) on March 31, 2018 to 4,590,205 shares (approximately 1.2% of total UEX shares outstanding) on October 24, 2018.

UEX currently holds a 45% interest in the Christie Lake Project and is working under an option agreement to earn up to a 70% interest.  The Project is located approximately 9 km northeast and along strike of Cameco’s McArthur River Mine, the world’s largest uranium producer.  The P2 Fault, the controlling structure for all of the McArthur River deposits, continues to the northeast beyond the mine.  UEX believes that through a series of en-echelon steps the northeast strike extension of the P2 Fault not only crosses the Project but also controls the three known uranium deposits on Christie Lake, the Ōrora, Paul Bay and Ken Pen Deposits.

The eighteen projects are located in the eastern, western and northern perimeters of the Athabasca Basin, the world's richest uranium belt, which in 2017 accounted for approximately 22% of the global primary uranium production.  UEX is currently advancing several uranium deposits in the Athabasca Basin which include the Christie Lake deposits, the Kianna, Anne, Colette and 58B deposits at its currently 49.1%-owned Shea Creek Project (located 50 km north of Fission’s Triple R Deposit and Patterson Lake South Project, and NexGen’s Arrow Deposit) the Horseshoe and Raven deposits located on its 100%-owned Horseshoe-Raven Development Project and the West Bear Uranium Deposit located at its 100%-owned West Bear Project. 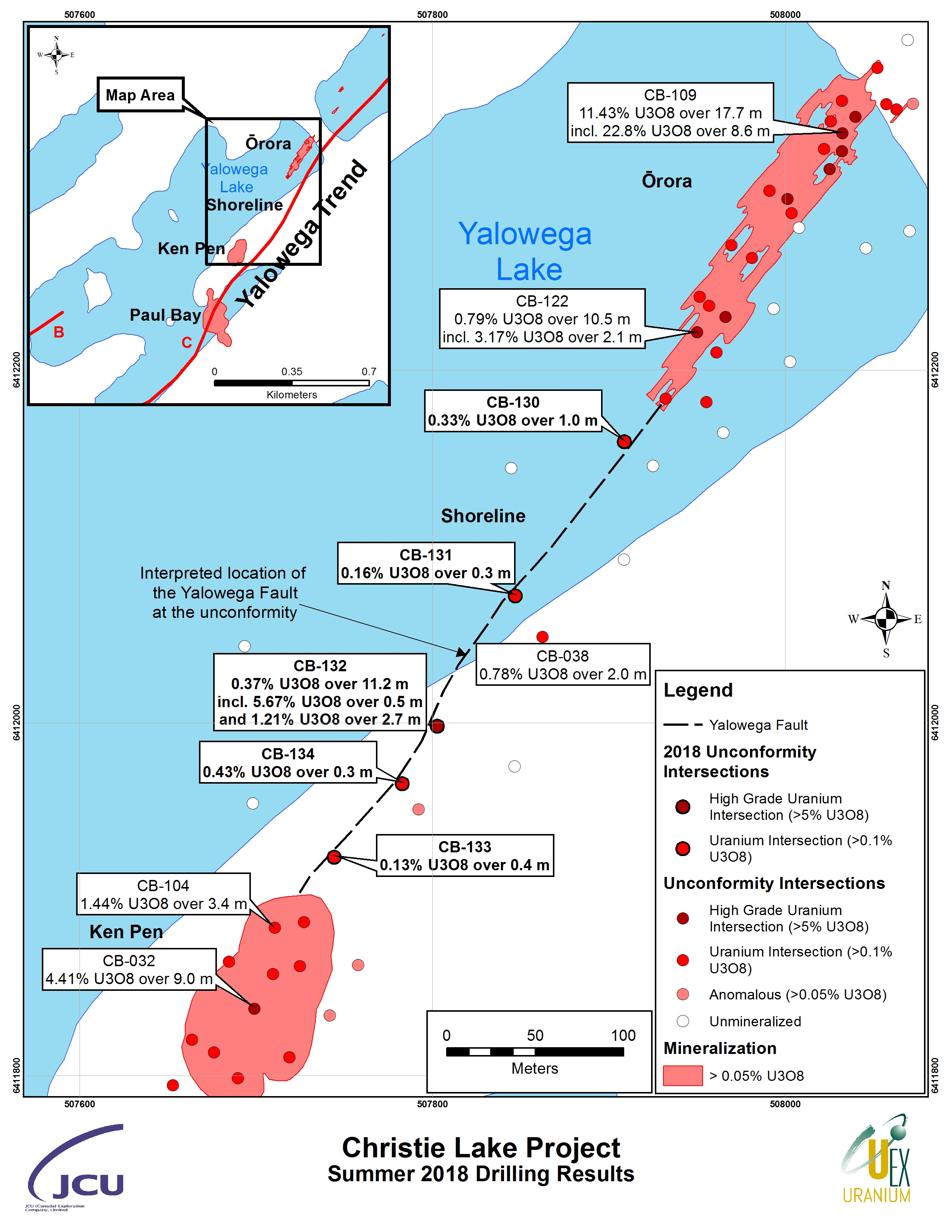