Webinar to be Held on Tuesday, February 25th

Saskatoon, Saskatchewan, February 20, 2020 – UEX Corporation (TSX:UEX) (“UEX” or the “Company”) is pleased to announce that the winter drilling program has commenced on the West Bear Project.  The drill program will be focused on the discovery of new cobalt, nickel and uranium mineralization within similar geological settings to that observed at the West Bear Co-Ni Deposit.

The first holes of the program will be drilled in the Umpherville target area, located 2 km immediately north of the West Bear Co-Ni Deposit along the northern rim of the highly prospective West Bear Dome (see Figure 1).  The one and only drill program at Umpherville occurred in 1977, long before UEX discovered that the Athabasca Basin contains basement-hosted Co-Ni Deposits.  At the time these holes were drilled the prevailing uranium exploration practice dictated that drill holes be terminated at depth of no more than 25 m below the unconformity surface.  At West Bear, the best cobalt and nickel concentrations occur within the fault structure at least 30 m below the unconformity.

Within the Umpherville area, the historical drilling encountered uranium mineralization at the unconformity on two fences of holes located approximately 1200 ft apart (see Figure 2).  The historical drill holes did not test the ideal uranium or cobalt target on and between these two fences. Of significant interest to UEX is historical hole ML-77-05, which intersected 0.22% eU3O8 over 4 ft (1.22 m) near the unconformity.  Encouraged by these results, the historical operator made two separate attempts to expand the size of the ML-77-05 uranium mineralization.  Both attempts were abandoned when the holes collapsed after encountering intense hydrothermal clay alteration, similar to that observed in the West Bear deposits.

Using modern drilling technology, UEX is confident that results of historical hole ML-77-05 will be successfully followed-up during this winter’s drill program.

There has been no historical drilling over a distance of 1.5 km along strike of the easternmost fence of Umpherville holes (ML-77-15 & 16).  A total of 15 drill holes totaling 1,900 m is planned for the Umpherville target area and along strike to the northeast where several other prospective targets have been identified containing anomalous cobalt and nickel concentrations.

UEX Increases its Interest in Christie Lake to 64.34%

The Company has confirmed with its joint venture partner, JCU (Canada) Exploration Company Limited (“JCU”) that UEX’s interest in the Christie Lake Project is currently 64.36% and JCU’s interest is 35.66% effective December 31, 2019

UEX will be holding a webinar at 12 pm EST/9 am PDT on Tuesday, February 25, 2020 to update shareholders on UEX’s exploration activities.  The webinar is open to all audiences.

The purpose of the webinar is to provide an update on the 2020 exploration activities and UEX’s views on the uranium and cobalt markets.  All participants will have the opportunity to submit questions prior to and following the presentation.

After registering, participants will receive a confirmation email containing information about joining the webinar.  Please be advised that the total number of registrants is limited.  For those interested but unable to attend, a video of the webinar will be posted on the UEX website (www.uexcorp.com) shortly after the event has concluded.

The West Bear Property is an advanced exploration project located in the eastern Athabasca Basin of northern Saskatchewan, Canada that contains both the West Bear Cobalt-Nickel Deposit and the West Bear Uranium Deposit.  The Property is approximately 740 km north of Saskatoon, west of Wollaston Lake and measures approximately 7,983 hectares comprising of 24 contiguous areas to which UEX has 100% ownership, with the exception of Mineral Lease 5424 in which UEX owns a 77.575% interest.  The Deposit is located within an area of the Athabasca Basin that has excellent infrastructure and is situated within 10 km of an existing all-weather road and power lines that service Cameco Corporation’s nearby Cigar Lake Mine and Rabbit Lake Operation, as well as Orano’s McClean Lake Operation.

The West Bear Cobalt-Nickel Deposit currently has a strike length of over 600 m and a dip length of over 100 m.  Prior to expanding the size of the deposit in 2019, on July 10, 2018, the Company announced a maiden inferred resource estimate for the Deposit of 390,000 tonnes grading 0.37% cobalt and 0.22% nickel, which equates to 3,172,000 pounds of cobalt and 1,928,000 pounds of nickel which does not include any results from the 2019 drilling program.  The West Bear Cobalt-Nickel Deposit mineral resources were determined using a cut-off grade of 0.023 percent cobalt equivalent (“CoEq”), using the equation CoEq = Co + (Ni x 0.2).  Only mineralization located within a conceptual open pit was included in the final resource estimate.

UEX currently holds a 64.34% interest in the Christie Lake Project and has entered into a joint venture with JCU.  The Project is located approximately 9 km northeast and along strike of Cameco’s McArthur River Mine, the world’s largest uranium producer.  The P2 Fault, the controlling structure for all of the McArthur River deposits, continues to the northeast beyond the mine.  UEX believes that through a series of en-echelon steps the northeast strike extension of the P2 Fault not only crosses the Project but also controls the three known uranium deposits on Christie Lake, the Ōrora, Paul Bay and Ken Pen Deposits.

The technical information in this news release has been reviewed and approved by Roger Lemaitre, P.Eng., P.Geo., UEX’s President and CEO, Trevor Perkins, P.Geo., UEX’s Exploration Manager, and Chris Hamel, P.Geo., UEX’s Chief Geologist, who are each considered to be a Qualified Person as defined by National Instrument 43-101.

UEX (TSX:UEX, OTC:UEXCF.PK, UXO.F) is a Canadian uranium and cobalt exploration and development company involved in an exceptional portfolio of uranium projects, including a number that are 100% owned and operated by UEX, one joint venture with Orano Canada Inc. (“Orano”) and ALX Uranium Corp. (“ALX”) that is 50.1% owned by UEX and is under option to and operated by ALX, as well as eight joint ventures with Orano, one joint venture with Orano and JCU (Canada) Exploration Company Limited, which are operated by Orano, and one project (Christie Lake), that is 64.34% owned by UEX with JCU (Canada) Exploration Company Limited which is operated by UEX.

Our portfolio of projects is located in the eastern, western and northern perimeters of the Athabasca Basin, the world's richest uranium belt, which in 2017 accounted for approximately 22% of the global primary uranium production.  UEX is currently advancing several uranium deposits in the Athabasca Basin which include the Christie Lake deposits, the Kianna, Anne, Colette and 58B deposits at its currently 49.1%-owned Shea Creek Project (located 50 km north of Fission’s Triple R Deposit and Patterson Lake South Project, and NexGen’s Arrow Deposit) the Horseshoe and Raven deposits located on its 100%-owned Horseshoe-Raven Development Project and the West Bear Uranium Deposit located at its 100%-owned West Bear Project. 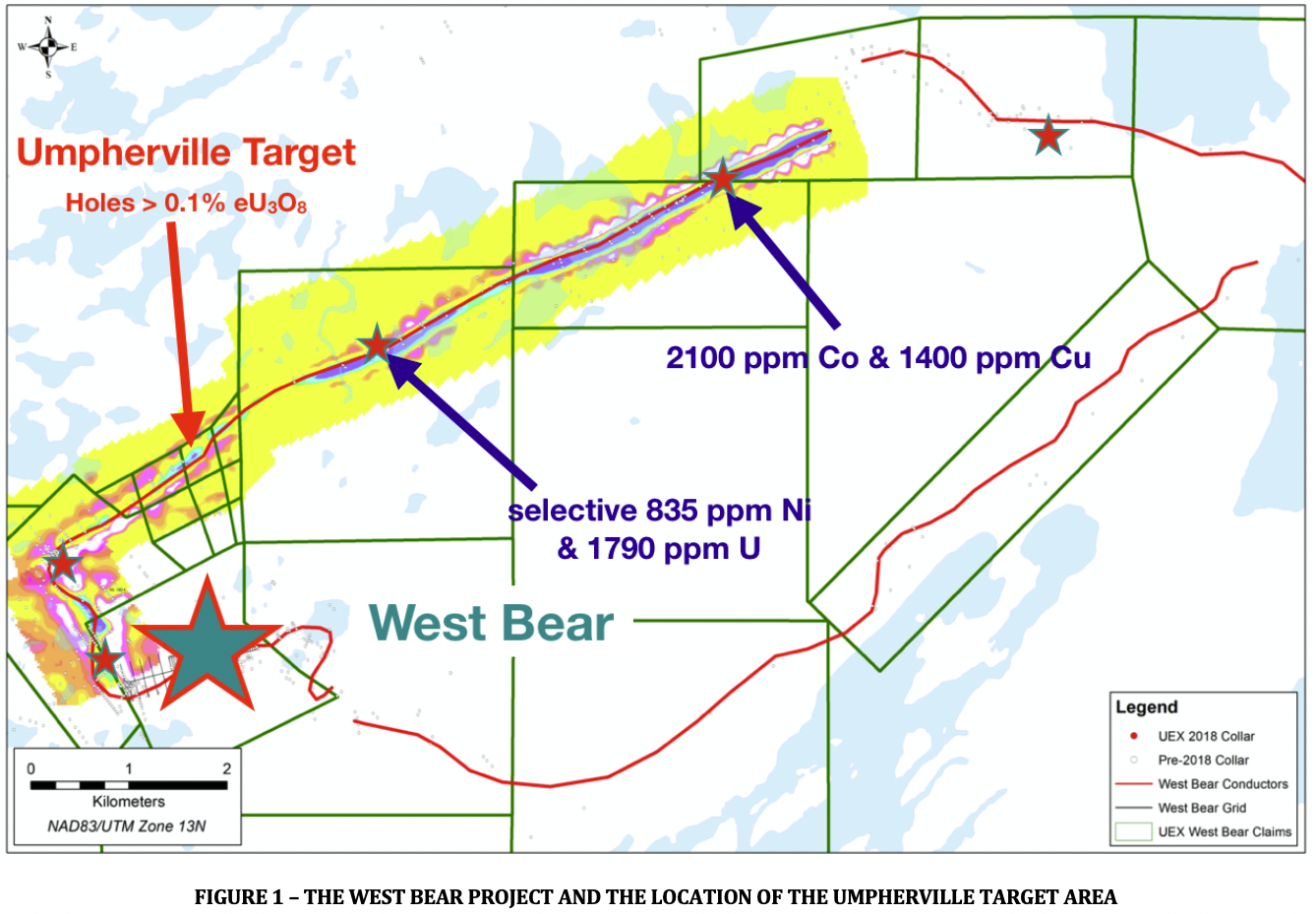 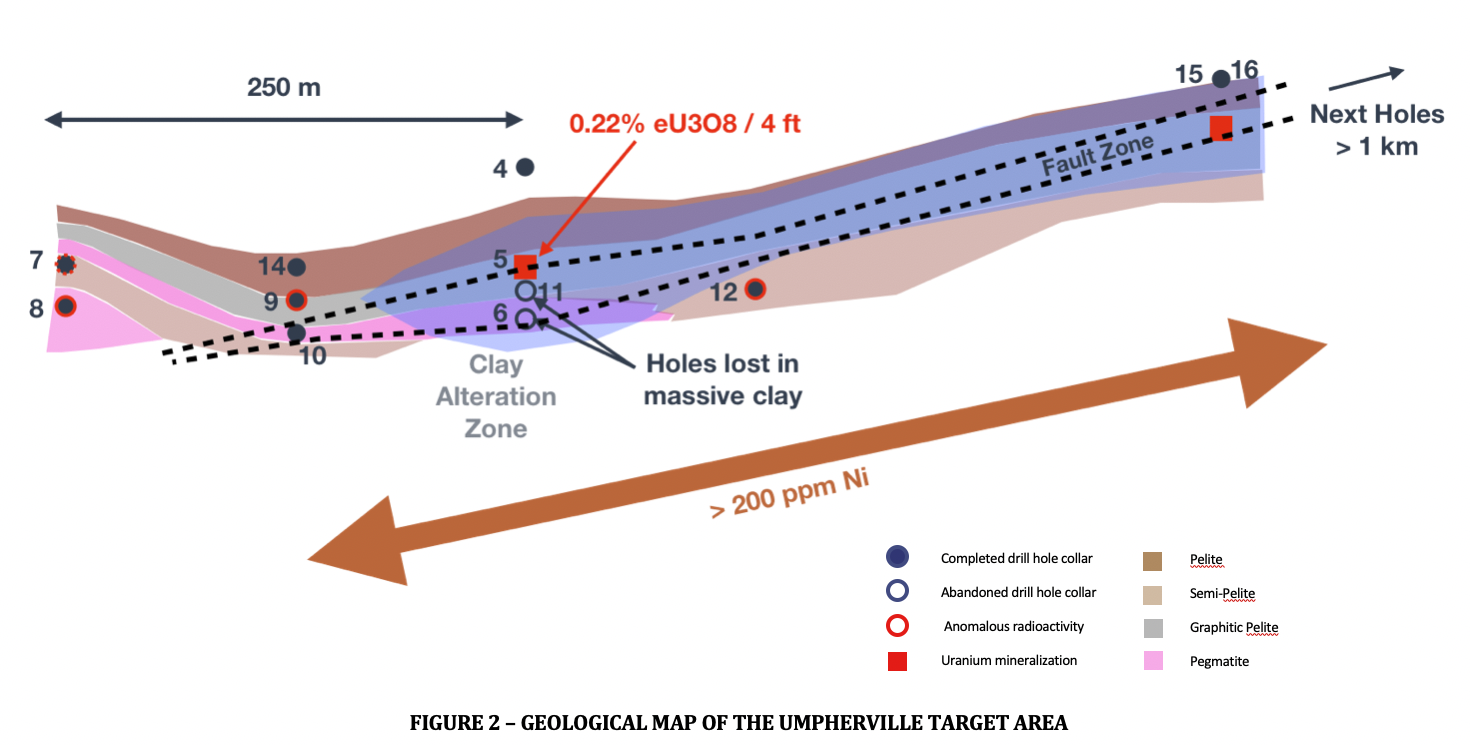