Saskatoon, Saskatchewan, August 4, 2020 – UEX Corporation (TSX:UEX) (“UEX” or the “Company”) is pleased to announce the commencement of its 2020 exploration drilling program at the Christie Lake Project, located in the Athabasca Basin of northern Saskatchewan (see Figure 1).

The summer drill program will focus on testing targets in the Ōrora North area, a 1,300 m long by 300 m wide resistivity anomaly coincident with an electromagnetic conductor.  This target is parallel to the productive Yalowega Trend, approximately 150 m north of UEX’s Ōrora Uranium Deposit.  The conductor located within the Ōrora North resistivity anomaly has never been tested by diamond drilling.  The first phase of the summer drilling program will consist of three holes totaling 1,800 m.  Additional drilling under a second phase will be dependent upon the results of the Phase I program.

The Ōrora North Resistivity Anomaly was defined during the 2019 geophysical program and is similar in nature to the anomalies that were defined over the nearby Paul Bay and Ken Pen Uranium Deposits (see Figure 2).  In the Athabasca Basin, resistivity surveys may sometimes image the hydrothermal clay alteration envelope and basement graphitic pelitic rocks associated with unconformity uranium deposits.  The Ōrora North Resistivity Anomaly is located north of and parallel to the Yalowega Trend, which led to the interpretation that the Ōrora mineralized trend may be offset by a north-trending fault.  Subsequent drilling of three holes in the Fall of 2019 at the southwest margin of the Ōrora North Resistivity Anomaly defined a northwest-oriented fault structure that contained strong hydrothermal alteration, thick dravite veining, and substantial geochemical enrichment of uranium over wide intervals within the sandstone column.  Such features are observed proximal to the three known uranium deposits at Christie Lake (see UEX News Release dated October 29, 2019).

To assist the Company with drill targeting within the Ōrora North Resistivity Anomaly, UEX commissioned a focused fixed loop electromagnetic survey (“EM”) over this area this past winter.  The survey defined a new EM conductor extending the entire length of the resistivity anomaly that has never been tested by drilling (see Figure 2).  This summer’s exploration program will be the first drill tests of this new conductor.

UEX currently holds a 64.34% interest in the Christie Lake Project and has entered into a joint venture with JCU.  The Project is located approximately 9 km northeast and along strike of Cameco’s McArthur River Mine, the world’s largest uranium producer.  The P2 Fault, the controlling structure for all of the McArthur River deposits, continues to the northeast beyond the mine and onto the Christie Lake Project.  UEX believes that through a series of en-echelon steps the northeast strike extension of the P2 Fault not only crosses the Project but also controls the three known uranium deposits on Christie Lake, the Ōrora, Paul Bay and Ken Pen Deposits.

The technical information in this news release has been reviewed and approved by Roger Lemaitre, P.Eng., P.Geo., UEX’s President and CEO,, and Chris Hamel, P.Geo., UEX’s Chief Geologist, who are each considered to be a Qualified Person as defined by National Instrument 43-101. 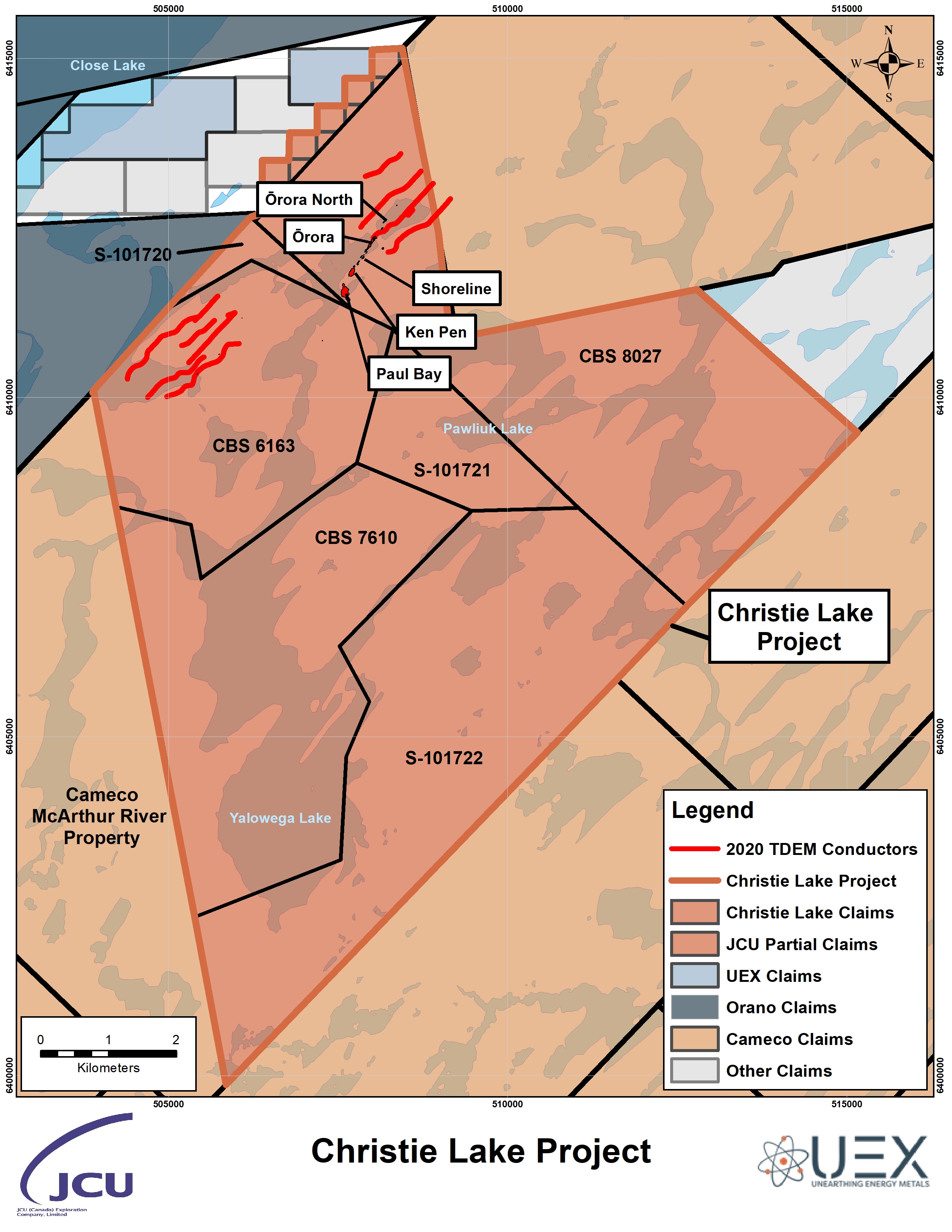