Saskatoon, Saskatchewan, October 1, 2020 – UEX Corporation (TSX:UEX) (“UEX” or the “Company”) is pleased to announce the results of its 2020 summer exploration drilling program at the Christie Lake Project, located in the Athabasca Basin of northern Saskatchewan (see Figure 1).

Holes CB-150 and CB-151 tested the resistivity anomaly on Line 79N, approximately 1,100 m northeast and along strike of the Ōrora Deposit.  These holes encountered strong hydrothermal clay alteration in the lower sandstone column coincident with a wide fault zone that is geochemically enriched in uranium and boron (with over 2 ppm U over a width of over 29 m in CB -151).  The hydrothermal alteration, uranium geochemistry and structure intersected in these two holes is considered to be a substantial upgrade to the results from UEX’S 2018 drill holes along the trend to the southwest (see Figure 1).  The re-emergence of the strong alteration, structure and uranium geochemical enrichment in CB-150 and CB-151 is considered a very positive development that will warrant additional drill testing.  The nearest historical drill holes to CB-150 and CB-151 are located over 300 m along strike to the southwest.

Hole CB-149 was drilled on Line 69N to test the southern end of the Ōrora North Resistivity Anomaly (see Figure 1) where a newly defined electromagnetic conductor was projected to intersect the highly uranium-enriched and dravite clay-filled cross-cutting fault just north of the Ōrora Deposit.  This cross-cutting fault is oriented in an east-west direction and was encountered by UEX during the 2019 drilling program (see UEX news release dated October 29, 2019).  CB-149 encountered both the cross-cutting fault and the fault associated with the conductor, which contained modest uranium enrichment and weak hydrothermal alteration.

Hole CB-152 was drilled on Line 70N to test the intersection of the altered and uraniferous east-west fault encountered in CB-149 with the main Yalowega Fault approximately 175 m northeast and along strike of the Ōrora Deposit.  The intersection of east-west faults with larger fault structures is often the preferred location of uranium mineralization in several uranium deposits in the Athabasca Basin, such as at Cameco’s Eagle Point and McArthur River Mines, the Millennium Deposit and at UEX’s Shea Creek Project.  CB-152 targeted the intersection of the east-west fault and the Yalowega Fault approximately 25 m down-dip and down-plunge of historical hole CB-060.  Historical hole CB-060 encountered three intervals of uranium mineralization at and just below the unconformity, the best of which assayed 2.07% U3O8 over 0.75 m.  While CB-152 encountered strong uranium enrichment of the basal 50 m of sandstone (averaging 8.24 ppm U) the uranium mineralization from CB-060 did not extend into the basement in this hole.

The summer drill program has confirmed that the northern end of the Ōrora North Resistivity Anomaly is a high-priority target that will require follow-up exploration.  The discovery of the east-west uranium and boron-bearing fault structures has also led the exploration team to re-investigate the potential of the Shoreline area (the area between the Ken Pen and Ōrora Deposits) and along the parallel “A” and “B” Conductor trends located to the west of the deposits.  The “A” Conductor Trend is considered by UEX to be the direct extension of the P2 Fault, host structure to all of the uranium mineralization at the McArthur River Mine.  The “B” Conductor Trend occurs between the “A” Trend and the Yalowega Trend which hosts the Paul Bay, Ken Pen and Ōrora Deposits.  UEX discovered uranium mineralization on the “B” Trend in 2019 in hole CB-141 that averaged 1.17% eU3O8 over 1.9 m (see UEX News Release dated October 29, 2019).

UEX currently holds a 64.34% interest in the Christie Lake Project and has entered into a joint venture with JCU.  The Project is located approximately 9 km northeast and along strike of Cameco’s McArthur River Mine, the world’s largest uranium producer.  The P2 Fault, the controlling structure for all of the McArthur River deposits, continues to the northeast beyond the mine and onto the Christie Lake Project.  UEX believes that through a series of en-echelon steps the northeast strike extension of the P2 Fault not only crosses the Project but also controls the three known uranium deposits on Christie Lake, the Ōrora, Paul Bay and Ken Pen Deposits.

The technical information in this news release has been reviewed and approved by Roger Lemaitre, P.Eng., P.Geo., UEX’s President and CEO, and Chris Hamel, P.Geo., UEX’s Chief Geologist, who are each considered to be a Qualified Person as defined by National Instrument 43-101. 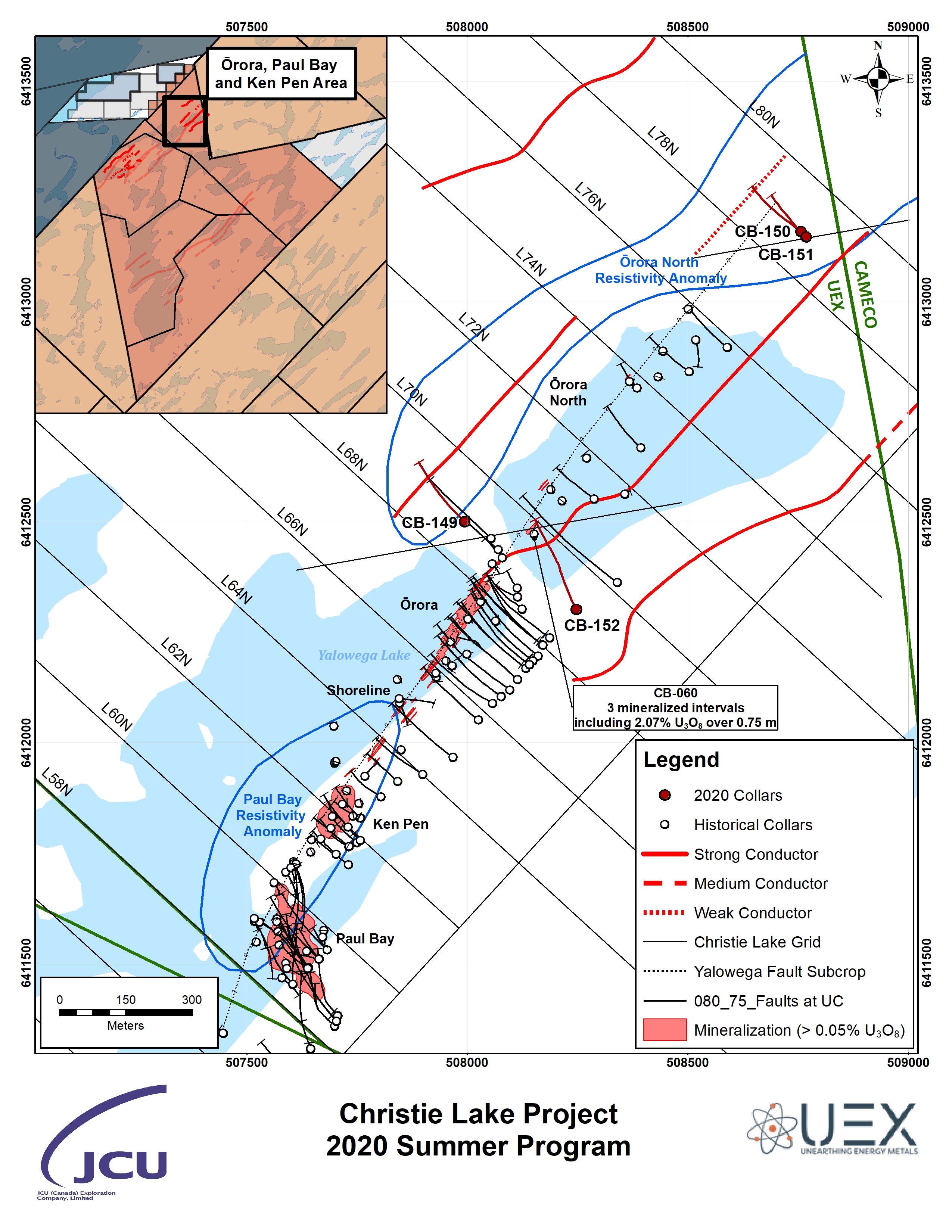