UEX Corporation (UEX:TSX) (“UEX” or the “Company”) is pleased to announce that the 2019 Phase II exploration program consisting of diamond drilling is underway on the Christie Lake Project (the “Project”).  The summer drilling program will consist of up to 8,000 metres of diamond drilling in approximately 12-15 holes utilizing two drill rigs with a budget of $2.0 million.

This spring, UEX completed the Phase I program comprised of a property-wide DC resistivity survey that had a budget of $750,000.  The survey showed several promising anomalies that has significantly increased the Company’s inventory of targets warranting drill-testing.

The summer program will focus on drill-testing targets in the three high priority areas outside the footprint of the existing deposits (see Figure 1).  Highest priority target is along the B Trend where the previous operator intersected uranium, cobalt and nickel mineralization in hole CB94-048 averaging 0.25% U3O8, 2.05% Co and 2.32% Ni over 1.5 m within a fault structure located approximately 50 m below the unconformity.  The unconformity target up-dip of this hole remains untested.  Follow-up of similar mineralization at the same depth below the unconformity in 2017 led UEX to the discovery of the Ōrora Deposit, approximately 4 km to the east.

The second priority area is Ōrora North, where a large and strong resistivity anomaly has been identified in the lower sandstone column oriented parallel to the C Conductor Trend approximately 175 m north of the Ōrora Deposit (see Figures 1 and 2).  This anomaly has never been drill-tested.    Sandstone resistivity anomalies are often associated with the alteration that envelopes unconformity uranium deposits, including UEX’s Paul Bay, Ken Pen and Ōrora Deposits.

The third priority area is the Southwest C Extension (see Figure 1) that covers the area 100 m to 600 m southwest along strike of the Paul Bay Deposit on the C Conductor Trend where limited drilling has been completed.  Within this area, hole CB96-083 intersected two narrow zones of uranium mineralization in a fault structure also located approximately 50 m below the unconformity that remains untested both up-dip at the unconformity and down-dip into the basement.

JCU informed UEX they will not be contributing their share of expenditures for both the Phase I and Phase II 2019 programs and will be diluting their interest in the project.  UEX agreed to contribute JCU’s share of all 2019 expenditures and as a result, UEX’s interest in the Christie Lake Project is expected to increase to approximately 64.3% and JCU’s interest is expected to decrease to approximately 35.7%

The purpose of the webinar is to provide a summer update on the 2019 exploration programs and UEX’s views on the uranium and cobalt markets.  All participants will have the opportunity to ask questions following the presentation.

After registering, participants will receive a confirmation email containing information about joining the webinar.  Please be advised that the total number of registrants is limited.  For those interested but unable to attend, a video of the webinar will be posted on the UEX website (www.uex-corporation.com) shortly after the event has concluded.

UEX currently holds a 60% interest in the Christie Lake Project and has entered into a joint venture with JCU.  The Project is located approximately 9 km northeast and along strike of Cameco’s McArthur River Mine, the world’s largest uranium producer.  The P2 Fault, the controlling structure for all of the McArthur River deposits, continues to the northeast beyond the mine.  UEX believes that through a series of en-echelon steps the northeast strike extension of the P2 Fault not only crosses the Project but also controls the three known uranium deposits on Christie Lake, the Ōrora, Paul Bay and Ken Pen Deposits.

The Christie Lake Project is currently estimated to contain 588,000 tonnes grading 1.57% U3O8, which equates to 20.35 million pounds of U3O8 using a cut-off grade of 0.2% U3O8 and are documented in the “Technical Report for the Christie Lake Uranium Project, Saskatchewan, Canada” which was filed on February 1, 2019 and has an effective date of December 13, 2018.  The Technical Report is available on the Company’s website at www.uex-corporation.com and on SEDAR at www.sedar.com.

The Company is also involved in two cobalt-nickel exploration projects located in the Athabasca Basin of northern Saskatchewan.  The 100% owned West Bear Project was formerly part of UEX’s Hidden Bay Project and contains the West Bear Cobalt-Nickel Deposit and the West Bear Uranium Deposit.  UEX also owns 100% of the Axis Lake Project located north of the village of Stony Rapids.

The twenty projects are located in the eastern, western and northern perimeters of the Athabasca Basin, the world's richest uranium belt, which in 2017 accounted for approximately 22% of the global primary uranium production.  UEX is currently advancing several uranium deposits in the Athabasca Basin which include the Christie Lake deposits, the Kianna, Anne, Colette and 58B deposits at its currently 49.1%-owned Shea Creek Project (located 50 km north of Fission’s Triple R Deposit and Patterson Lake South Project, and NexGen’s Arrow Deposit) the Horseshoe and Raven deposits located on its 100%-owned Horseshoe-Raven Development Project and the West Bear Uranium Deposit located at its 100%-owned West Bear Project. 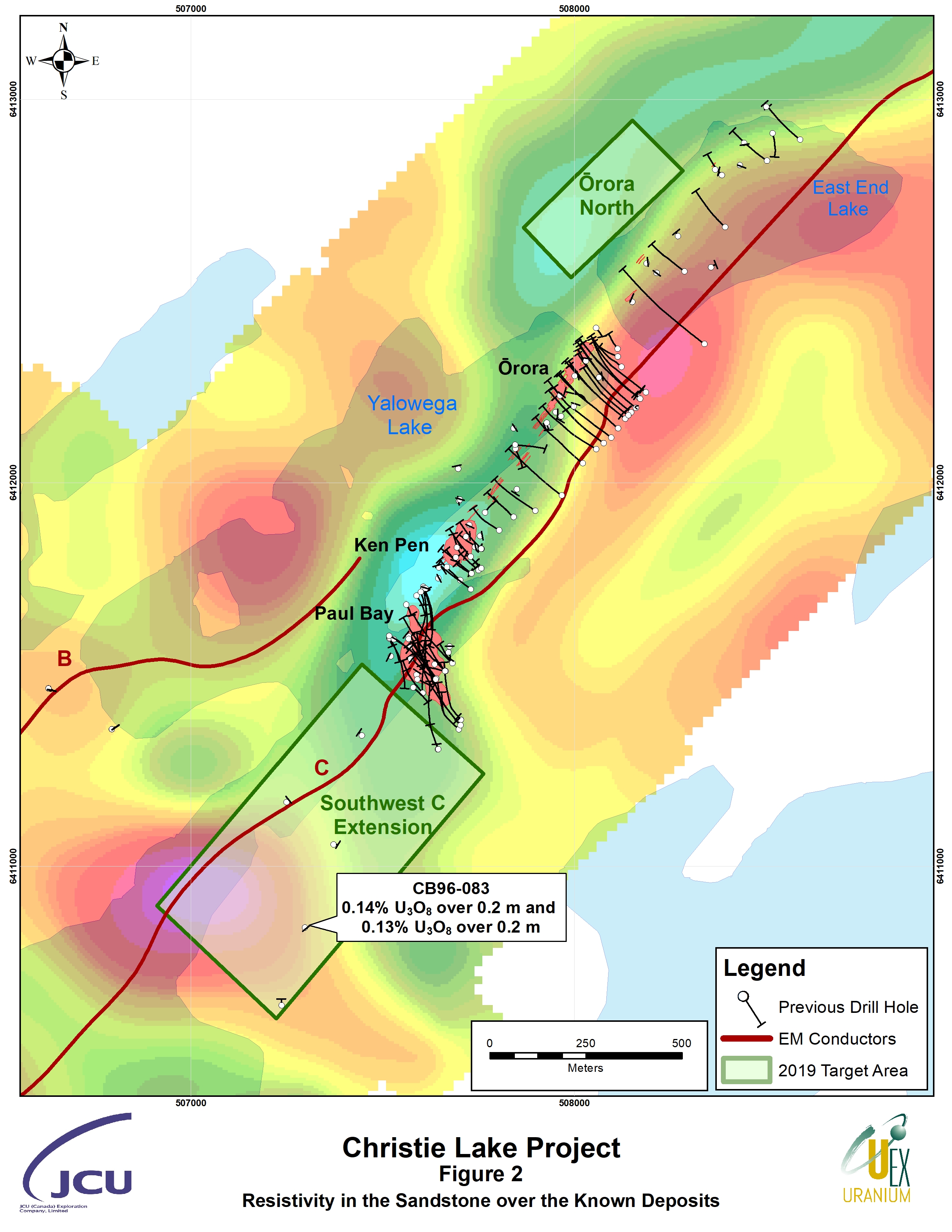