Saskatoon, Saskatchewan, August 26, 2021 – UEX Corporation (TSX:UEX) (“UEX” or the “Company”) is pleased to announce the commencement of the Christie Lake Fall 2021 exploration drill program. The Christie Lake Project is a joint venture between UEX with a 65.55% ownership stake and JCU (Canada) Exploration Company, Limited (“JCU”) with a  34.45% interest (JCU is 50% owned by UEX and 50% by Denison Mines Corp.).  The Christie Lake Project is located in the eastern Athabasca Basin of northern Saskatchewan (see Figure 1) immediately north and along strike of the McArthur River Uranium Mine.

The Fall drill program will focus on drill testing exploration targets along the Yalowega Trend Fault in the Ōrora North area to follow up the encouraging results of the 2020 drill program that intersected anomalous uranium geochemistry, faulting and indicative hydrothermal alteration in the basal sandstone coincident with a prominent DC resistivity low anomaly, northeast and along strike of the Ōrora Deposit (see UEX news release of October 1, 2020). While the 2020 program results were encouraging, these holes did not intersect the key fault structures at the optimum unconformity target location nor down-dip of the structure into the basement rocks where Athabasca-style uranium mineralization most commonly occurs.

The Company’s interest in the Ōrora North area has been enhanced after the recent release of Government of Saskatchewan mineral assessment reports that drilling in 2016 and 2017 along strike of the Ōrora North area on Cameco’s immediately adjacent land package intersected high-grade uranium mineralization at the unconformity that averaged 16.3% U3O8 over 8.1 m in hole MC-442 from 552.4 m to 560.5 m (see Figure 2).

The fall program will be comprised of 5-6 holes totaling approximately 3,000 m.  Start-up of the program was delayed from the planned late July start due to the challenges in securing a drill crew due to high demand for drillers for projects located outside the Athabasca Basin.

UEX regrets to announce the death of former director and former Chair of the Board, Mr. Colin Macdonald.  Colin was a founding Director of UEX, serving on the Board of the Company from 2001 until his retirement at the end of 2016.  Colin was a visionary, instrumental in helping UEX become established and listed on the Toronto Stock Exchange at a time when uranium prices were at all-time lows and when investors were skeptical about the future of nuclear power, well before the resurgence of the uranium junior exploration sector.

Colin had a 35-year career as a mineral exploration geologist, mostly within the uranium industry and was a key member of the Cameco Corporation exploration team, serving many years as Vice-President, Exploration before his retirement.  Colin’s obituary can be found at: https://saskatoonfuneralhome.com/tribute/details/3623/Colin-Macdonald/obituary.html

UEX has established a scholarship in memory of Colin that will be awarded annually to a student pursuing an education in the geological sciences, with a preference towards northern Saskatchewan-based candidates pursuing mineral exploration studies.

The UEX team is deeply saddened by Colin’s death.  We will miss Colin dearly, having been a key builder of the uranium industry in Saskatchewan, a substantial contributor to the emergence and growth of UEX, and for me personally, a great mentor.  However, it is safe to say that Colin will be most acutely missed as a true friend to all that have ever had the pleasure of his acquaintance.

UEX currently holds a 82.775% combined direct and indirect interest in the Christie Lake Project which the Company is in joint venture with JCU. The Project is located approximately 9 km northeast and along strike of Cameco’s McArthur River Mine, the world’s largest uranium producer. The P2 Fault, the controlling structure for all of the McArthur River deposits, continues to the northeast beyond the mine and onto the Christie Lake Project. UEX believes that through a series of en-echelon steps the northeast strike extension of the P2 Fault not only crosses the Project but also controls the three known uranium deposits on Christie Lake: the Ōrora, Paul Bay and Ken Pen Deposits.

The Christie Lake Project is currently estimated to contain 588,000 tonnes grading 1.57% U3O8, which equates to 20.35 million pounds of U3O8 using a cut-off grade of 0.2% U3O8 and as documented in the “Technical Report for the Christie Lake Uranium Project, Saskatchewan, Canada” which was filed on February 1, 2019 and has an effective date of December 13, 2018. The Technical Report is available on the Company’s website at www.uexcorp.com and on SEDAR at www.sedar.com.

UEX’s directly-owned portfolio of projects is located in the eastern, western and northern perimeters of the Athabasca Basin, the world's richest uranium belt, which in 2019 accounted for approximately 12.6% of the global primary uranium production.  In addition to advancing its uranium development projects through its ownership interest in JCU,  UEX is currently advancing several other uranium deposits in the Athabasca Basin which include the Paul Bay, Ken Pen and Ōrora deposits at the Christie Lake Project , the Kianna, Anne, Colette and 58B deposits at its currently 49.1%-owned Shea Creek Project, the Horseshoe and Raven deposits located on its 100%-owned Horseshoe-Raven Development Project and the West Bear Uranium Deposit located at its 100%-owned West Bear Project. 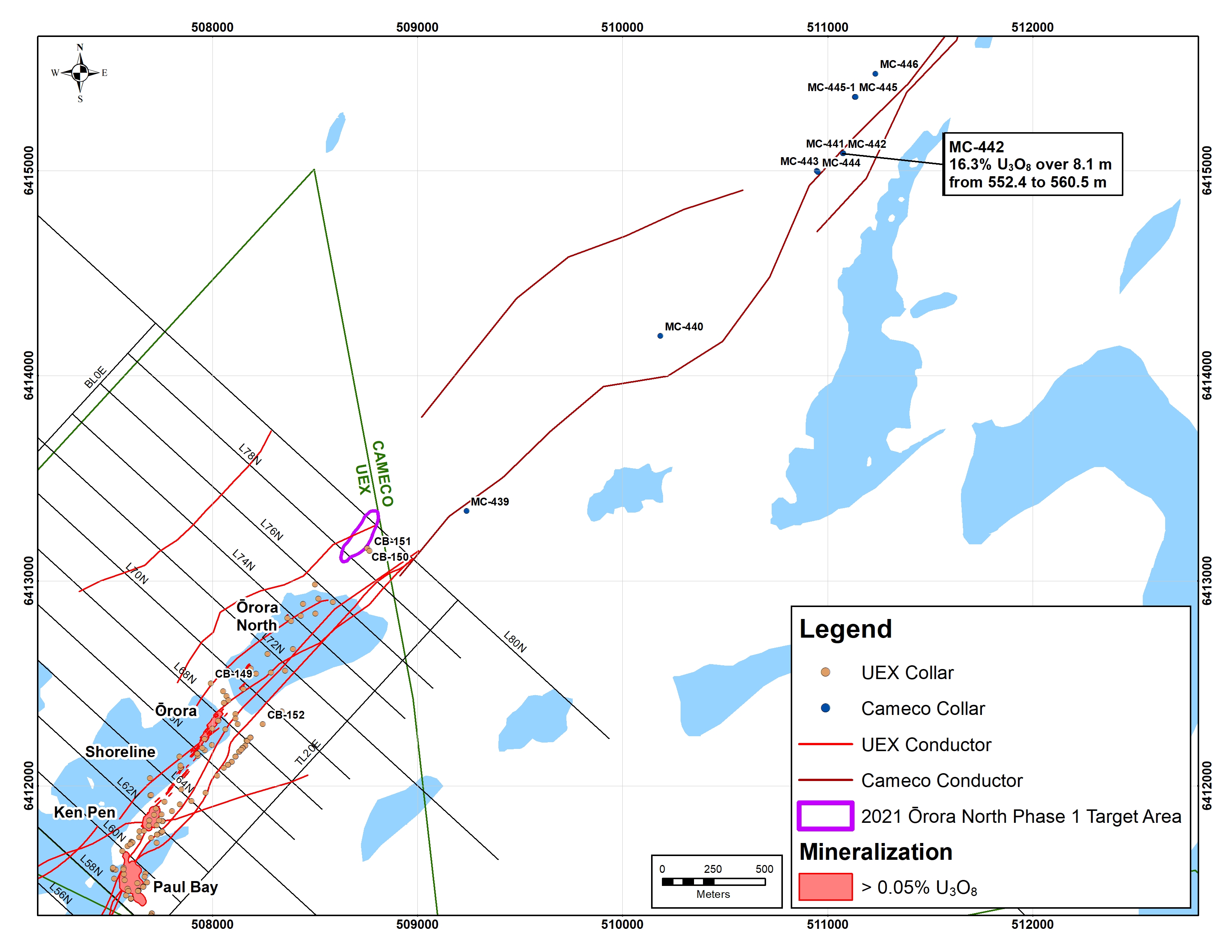 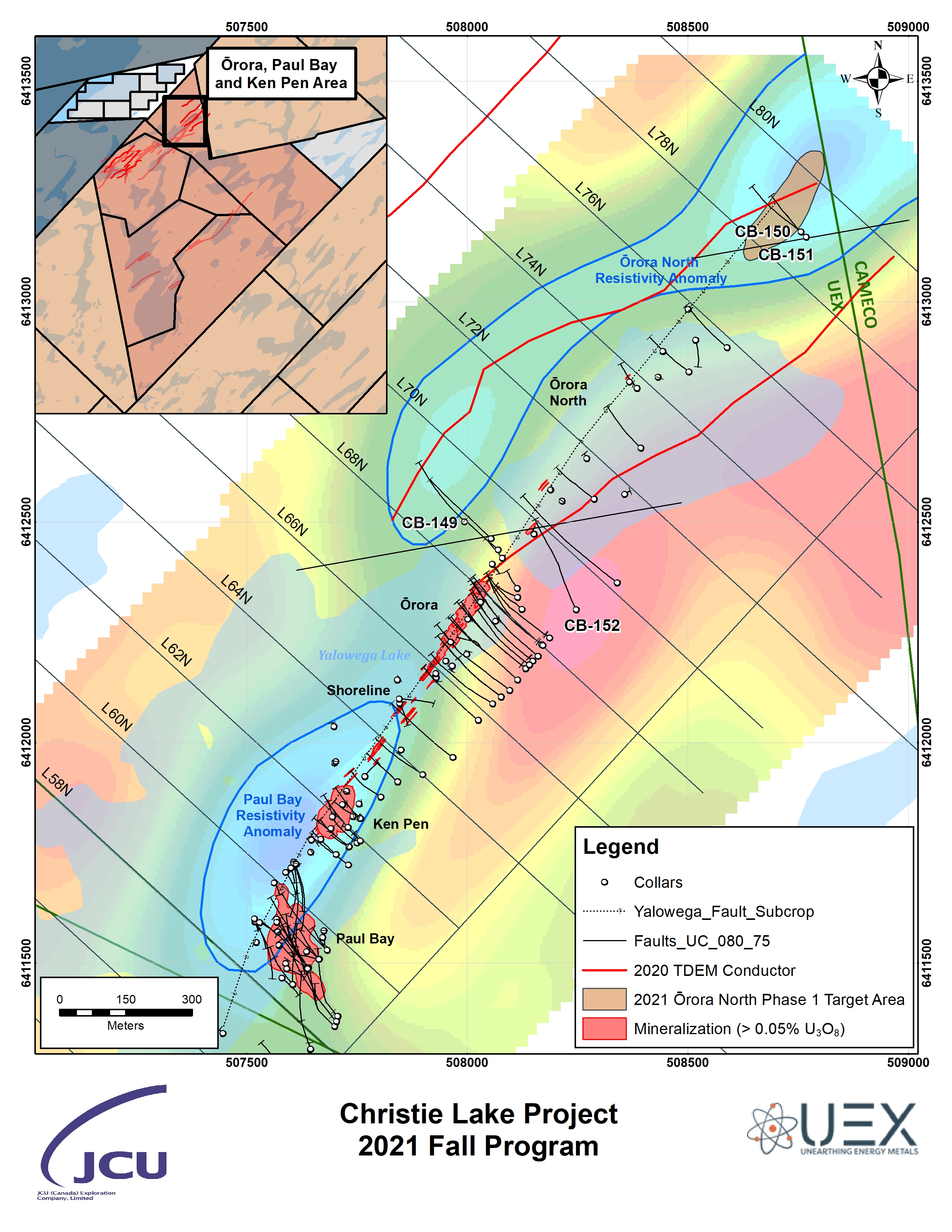